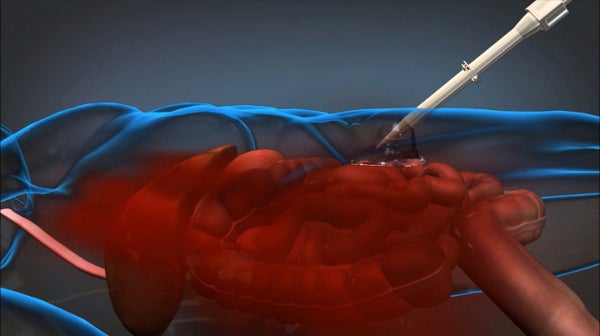 The US Defense Advanced Research Projects Agency (DARPA) has awarded a contract to Arsenal Medical to continue development of its foam technology for the treatment of intra-abdominal haemorrhage in wounded soldiers under phase II of its Wound Stasis System programme.

Awarded following the company’s successful pre-clinical proof-of-concept work in phase I, the $15.5m order brings the total contract value to $22.5m, and involves Arsenal supporting both late-stage development and regulatory submission to the US Food and Drug Administration (FDA).

As part of phase I funding, the company has developed an in-situ foam treatment, which successfully demonstrated its ability to control severe haemorrhaging for at least one hour following application in a liver injury model during testing.

Despite being minimally invasive and easily removable by doctors in less than one minute during surgical intervention, the product was successful in reducing blood loss six-fold; it also enhanced the survival rate at three hours post-injury to 72%, from the 8% observed in controls.

"A capability like this is important in any operation, but would prove vital during operations in austere areas where military resources and infrastructure are at a premium."

Blood absorption near the foam surface was found to be limited, while the inside of the foam block remained almost blood free.

Arsenal also presented pre-clinical data at the Annual Meeting of the American Association for the Surgery of Trauma in Hawaii, US, in September.

"A capability like this is important in any operation, but would prove vital during operations in austere areas where military resources and infrastructure are at a premium," Hix added.

Arsenal’s foam is a polyurethane polymer formed upon injection of a polyol phase and an isocyanate phase into the patient’s abdominal cavity that initially expands through pooled and clotted blood on the surface of injured tissue, and then sets into a solid state to prevent intra-abdominal blood loss.

Image: Arsenal Medical’s foam-based product can be injected into an injured soldier in the battlefield to slow blood loss. Photo: courtesy of DARPA.