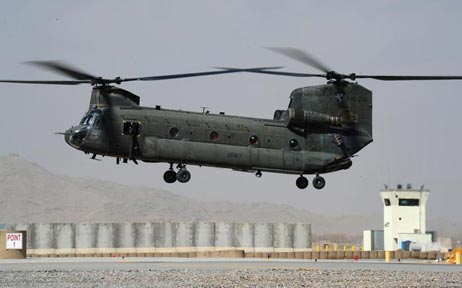 Columbia Helicopters is assisting the Australian Army in retrograde of its two CH-47D Chinook multi-mission helicopters from Afghanistan.

Around 15 Columbia Helicopters employees, including mechanics and electricians, as well as quality control and supervisory personnel, have been preparing the helicopters for shipment in Kandahar, Afghanistan, under a contract with the Australian Defence Force (ADF), since August 2013.

Specifically, the work involves removal of the rotor blades and heads, forward transmission, aft pylons and aft vertical shafts, which, along with the helicopter airframes, will be loaded aboard a Royal Australian Air Force’s (RAAF) C17 Globemaster-III aircraft for return to Australia.

The technicians also carried out heavy phase maintenance on the CH 47D helicopters.

Having flown 5,600 sorties since deployment on Operation Slipper in 2006, the two helicopters are scheduled to be returned to the 5th Aviation Regiment at the RAAF base in Townsville, Queensland.

Columbia Helicopters marketing vice-president, Todd Petersen, said the company has been working with the Australian Army in Kandahar over the last three-years.

"Columbia Helicopters maintenance crews will accompany the helicopters to Townsville, where they will reassemble the aircraft."

"Columbia Helicopters maintenance crews will accompany the helicopters to Townsville, where they will reassemble the aircraft," Petersen said.

Even though the contract work is scheduled to complete by the end of this month, the company will continue to maintain a full-time, on-site presence in Townsville, helping the army with maintenance support on the CH 47D for the next several years.

The Boeing-built helicopter can also be used for medical evacuation, disaster relief, search and rescue, aircraft recovery, parachute drops, as well as fire-fighting missions in all weather conditions.

Image: Australian Army’s CH-47D Chinook helicopter during its flight. Photo: copyright of the Commonwealth of Australia 2013.