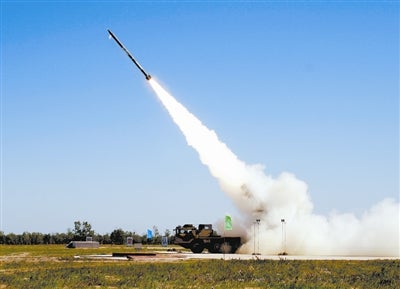 The army has completed design, analysis, and simulation of the new projectile and recently conducted testing of the technology at China Baicheng Weapon Test Center, during which the projectile accurately hit all of its targets, as reported by the PLA Daily.

During the demonstration, the terminal-sensing projectile flew over the target site and discharged a series of terminal-sensing submunitions, which in turn deployed mini-parachutes and automatically searched for the corresponding targets.

Baicheng Weapon Test Center test conductor Wang Huaijun said the terminal sensing ammunition is the smart ammunition which is capable of scanning the existence of the target at the end of its ballistic trajectory and direct its combat part to explode in the target’s direction.

TSA person in charge said while the TSA is penetrating the roof armour of the tank, it can also simultaneously produce massive amount of fragments to kill personnel and destroy equipment so as to achieve excellent combat performance.

TSA, also known as sensor-detonated ammunition, usually incorporates the structure of the cluster submunition, which is subsequently loaded with multiple sub-projectiles to deliver strong lethal power.

The projectiles, which are relatively cheap to produce, can be fired or launched from a range of cannons, long-range surface-to-surface missiles, air-to-ground missiles, and specifically aims to attack the roof armour of the grouped tanks and APCs.

The Military Ammunition Market in China to 2023: Market Brief

The Military Ammunition Market in China to 2025: Market Brief

The Artillery and Systems Market in China to 2025: Market Brief

The Military Infrastructure and Logistics Market in China to 2024: Market Brief

Future of the Chinese Defense Industry - Market Attractiveness, Competitive Landscape and Forecasts to 2023