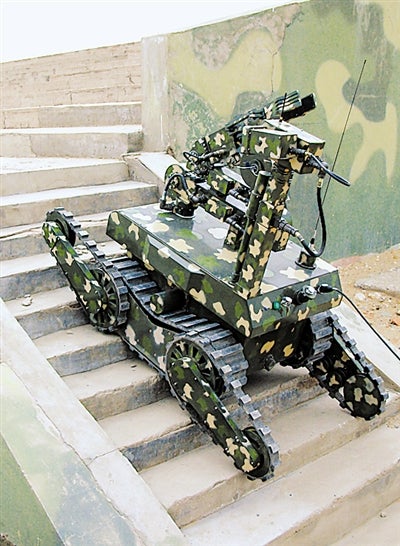 Developed over eight years by the Research Institute of Engineering Corps under the General Armaments Department (GAD) of the PLA, the robot is capable of providing assistance during dangerous EOD operations.

During the testing, the remotely controlled robot went to an EOD area on the test ground, crossing grassland, climbing stairs, overcoming obstacles on the ground and transmitting real-time pictures, such as state and ambient media of unexploded ordnance, back to the rear control platform.

Research Institute of Engineering Corps head Yang Jianhao said the EOD robot can change the shape of its tracks according to terrains and can move, not only on city streets, stairs and in alleys, but also across grassland and desert.

"It can distinguish itself while performing diversified military tasks," Jianhao added.

After the technicians determined the EOD programme, the robot, carrying a detonating submunition, slowly approached its target and evacuated the area safely. Following which, the operator pressed a remote control button, removing the unexploded ordnance completely.

Featuring an EOD device and a detonating and wireless remote control initiating device, the robot can be easily configured to perform dual functions of observing beaten zone and removing unexploded ordnance.

Capable of overcoming obstacles of a maximum of 30cm, the robot can wade across water of a maximum depth of 25cm at a speed of 60m/min and its mechanical hands can grasp a 5kg object and flexibly place a small-sized initiating device.

The robot exhibits portability, flexibility, good controllability and wide applicability and is primarily designed to conduct EOD missions, such as mine detonating, live-ammunition exercise and anti-terrorism and anti-violence operations.

Image: PLA’s newly unveiled EOD robot walks up and down the stairs during testing. Photo courtesy of: Liu Mingming.

The Military Radar Market in China to 2025: Market Brief

The Military GPS/GNSS Market in China to 2023: Market Brief

The Military Radar Market in China to 2024: Market Brief