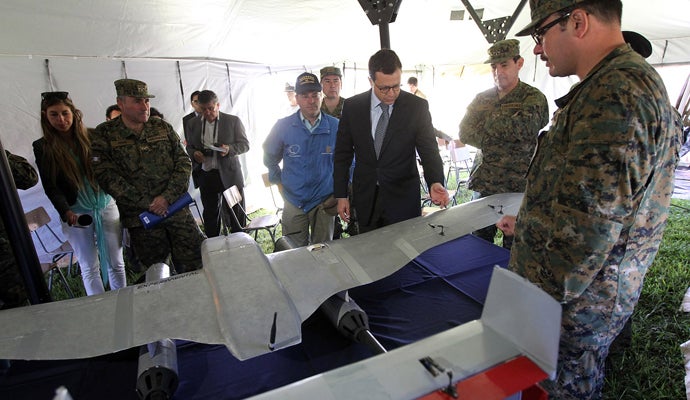 "The UAS can be used for a wide range of missions, including monitoring of water sources, volcanoes, support during natural disasters and rescue operations."

Developed by the Chile Army’s Centre for Army Modeling and Simulation (CEMSE) in collaboration with the University of Concepcion and private enterprise, the UAS has been designed to address the army’s requirements and also support search tasks in the event of a natural disaster.

Chilean defence minister Rodrigo Hinzpeter, who also attended the demonstration flight, said the UAS could be used for a wide range of missions, including monitoring of water sources, volcanoes, support during natural disasters and rescue operations, as well as fire monitoring and fisheries surveillance operations.

Hinzpeter added that the prototype’s joint development ‘demonstrates that in Chile there is intelligence, capacity for innovation, there are capabilities to enterprises of this nature, we sometimes think they are equity or monopoly only highly developed countries’.

In development since 2008, the Lascar UAS is powered by two electric engines that facilitate operation at a height of 300m from ground level without being observed by the ground based troops.

Launched by a catapult launch system and recovered by parachute, the drone features a central fuselage structure that can be installed with a day and night camera system and lightweight synthetic aperture radar (SAR), as reported earlier by Shephard Media.

With an endurance of two hours, the 14kg air vehicle can climb to an altitude of 11,500ft and operate up to 30km from the ground control station (GCS), which can be fitted inside an all-terrain vehicle such as the high mobility multipurpose wheeled vehicles (HMMWVs).