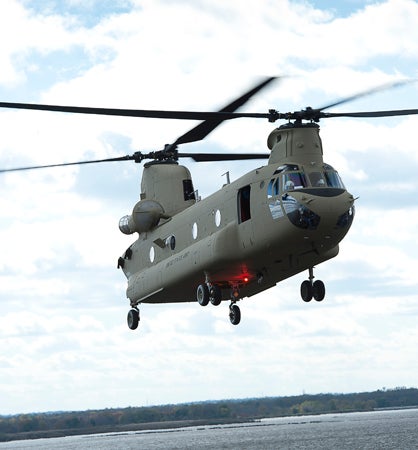 The US Army has awarded a $370m contract to Boeing for the delivery of 14 additional CH-47F Chinook helicopters to Australia and UAE as part of the US foreign military sales (FMS) programme.

Under the terms of a previous FMS agreement between the US Government and the two countries, the company will provide seven of the 14 new Chinooks to the Australian Defence Force, while UAE will receive six aircraft. The company recently invested $130m to establish a Chinook manufacturing facility near Philadelphia, US. The remaining aircraft will be delivered to the US Army to fulfil its requirements, starting in 2014.

H-47 Programmes vice-president Leanne Caret said that the new sale will bring total aircraft delivery to over 200 for both domestic and international customers. To date, Boeing has trained and equipped eight US Army units with the Chinook since the introduction of the first CH-47F production aircraft in August 2006 and is presently equipping the ninth unit.

Currently, six army units have completed deployments in Iraq and Afghanistan performing missions such as air assault, transport, medical evacuation and support operations while maintaining an operational readiness rate of more than 85%. More than 450 Chinooks are currently in operation with military forces in 17 countries including Japan, the UK, Italy, the Netherlands, Australia, Canada, Thailand, Taiwan, Greece, Korea and Spain.