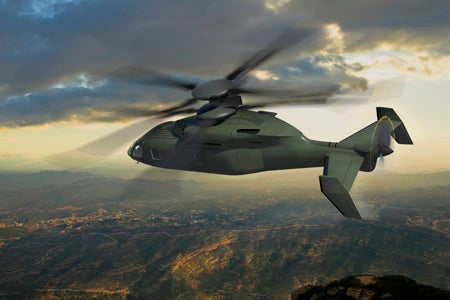 Boeing and Sikorsky have teamed up to offer a joint proposal for the US Army’s joint multirole (JMR) technology demonstrator (TD) phase 1-air vehicle development programme.

Based on Sikorsky’s X2 Technology rotorcraft design, the proposal is being submitted in response to the JMR TD programme solicitation released by the Army Aviation Applied Technology Directorate (AATD) in November 2011.

"By leveraging our proven design, we can offer the army reduced risk, a 100k improvement in speed, a 60% improvement in combat radius, and 50% better high-hot hover performance," Mehta added.

Boeing Vertical Lift division vice president and general manager Leanne Caret said Sikorsky will serve as a lead in JMR TD Phase 1 proposal, with the company assuming a lead role for the second phase, which is the mission systems demonstrator programme.

"Our companies are fully committed to the long-term nature of the future vertical lift initiative, and we will contribute equally in terms of capital, technological capability and risk on our path to meeting the army’s requirements."

"Our companies are fully committed to the long-term nature of the future vertical lift initiative, and we will contribute equally in terms of capital, technological capability and risk on our path to meeting the army’s requirements," Caret said.

A partnership agreement was signed by both companies earlier this year for the joint proposal, which covers development and test flight of one or more demonstrator aircraft, to help the army specify requirements for a next-generation vertical lift utility and attack aircraft.

JMR TD Phase 1 proposals are scheduled to be submitted by 6 March, followed by an announcement of one or more winning bids in late-2013, with flight test of demonstrator aircraft expected to take place in 2017.

Image: An artist’s depiction of a Sikorsky-Boeing team’s concept aircraft for US Army’s JMR TD programme. Photo: courtesy of Sikorsky and Boeing.