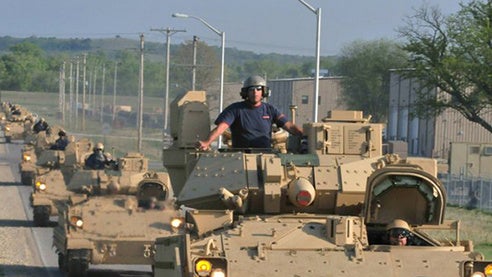 The US Army Tank-automotive and Armaments Command (TACOM) Life Cycle Management Command (LCMC) has awarded a contract to BAE Systems for retrofit of the Bradley infantry fighting vehicles (IFVs).

Under the terms of the $97m deal, BAE will partially dismantle, reconstruct and evaluate a total of 146 Bradley vehicles to restore and expand their service life.

BAE Systems Vehicle Systems vice president and general manager Mark Signorelli said the company would ensure the delivery of Bradleys are restored to their full capability to the soldiers.

"This important work reinforces the Bradley as a vital asset to the US Army and helps maintain the skilled workforce imperative to the defence industrial base," Signorelli added.

"This important work reinforces the Bradley as a vital asset to the US Army and helps maintain the skilled workforce imperative to the defence industrial base."

During the level-II reset programme, vehicles will be initially dismantled at the Red River Army Depot in Texas, US, and key components will be subsequently delivered to the company for reconstruction and performance validation.

Upgrade work under the contract is scheduled to start later this month at the company's facilities in Pennsylvania, California and Aiken, South Carolina, US, and at the Red River Army Depot, with completion estimated for July 2014.

The M-2/M-3 Bradley is a heavy-fighting vehicle designed to transport infantry on the battlefield with armour protection, while providing covering fire to suppress enemy troops and armoured vehicles.

A $55m contract has also been secured by the company earlier this month to support the second phase of Bradley engineering change proposal (ECP 2) programme through to 2017.