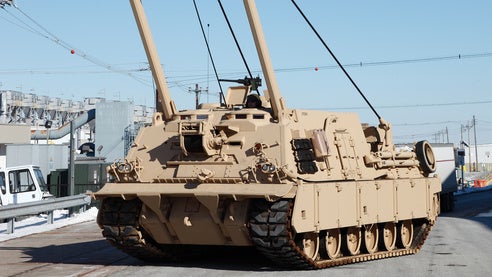 Awarded by the US Army TACOM Life Cycle Management Command, the $28.7m contract covers the conversion of 11 vehicles and brings the total value of orders on the programme secured by the company to $2.1bn.

BAE Systems Armored Combat Systems vice president and general manager Mark Signorelli said the M88A2 can hoist and tow twice the weight compared to an M88A1, and is a critical component in helping the US armed forces successfully fulfil recovery missions.

”This contract demonstrates the continued need to invest in the Hercules and shows the Army’s commitment to the irreplaceable role it serves,” Signorelli said.

Around 575 Hercules vehicles have been fielded to date by the company against an overall army requirement of 632 vehicles, while 84 vehicles have also been delivered to the US Marine Corps.

Powered by the Continental AVDS-1790-2DR diesel engine, the M88A is all weather armoured recovery vehicle (ARV) designed to repair or replace fighting vehicles’ damaged parts during combat, and also extract vehicles that have slowed down or become entangled.

Contract work will be carried out at the company’s facilities in Pennsylvania and South Carolina, US, while deliveries are scheduled to be completed in March 2014.

Image: The M88A2 Hercules configuration is the improved recovery system of choice for the existing 70t combat vehicles. Photo: Courtesy of BAE Systems.