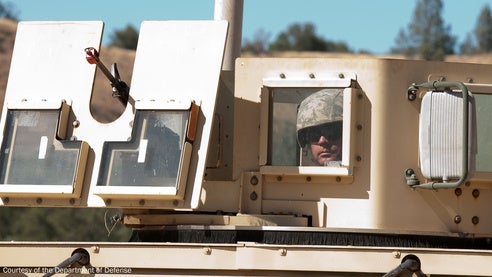 The US Army Tacom has placed orders with BAE Systems to provide additional gunner protective kits (GPK) for installation on its M1151 and M1114 High Mobility Multipurpose Wheeled Vehicles (HMMWVs).

Bae Systems’ Support and Technical Services vice president Robert Houston said that the company will provide products that will safeguard armed forces while in combat.

"The gunner protection kit and shield allows the soldier to maintain a protected posture while performing mission objectives with full visibility through the vehicle’s armoured turret," Houston added.

Featuring tall armour and transparent shields, the GPKs provide improved and enhanced visibility of the area surrounding the vehicle, while safeguarding the gunner.

Additional features of the system include a combination of steel, transparent armour windows and configured rear-view mirrors that protects the gunner against rifle fire and roadside bomb blasts.

The gunner shield kit, on which the weapon systems are mounted, protects the gunner while firing the weapon.

Work under the contract will be carried out at the company’s facility in Fairfield, Ohio, US, with deliveries expected to take place in November 2012.

The US army has received a total of 6,413 kits from the company to date.
With improved ballistic protection levels, M1114 is used by the US army to provide protection against small arms artillery airbursts and anti-tank mine blasts when conducting missions such as scouting, military policing and explosive ordinance disposal.

The M1151 is a reliability enhanced HMMWV that has been designed to endure South West Asia’s extreme environmental conditions under increased payload demands.