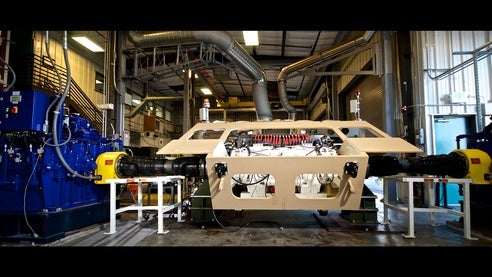 BAE Systems has successfully completed 2,000 miles of advanced testing of the hybrid electric drive (HED) system of its proposed vehicle for the US Army’s ground combat vehicle (GCV) programme.

Carried out on a fully integrated Hotbuck mobility platform, at the company’s facility in Santa Clara, California, the testing accurately replicated conditions at two well-known military test tracks to further evaluate the performance, efficiency and maturity of the HED technology.

Bae Systems armored combat systems vice-president and general manager, Mark Signorelli, said the testing puts the company team ahead of schedule both now and in the programme’s next phase, saving army development time and money.

”Our primary objective was to test our hybrid electric technology over time against realistic environments, and the successful completion of the testing is a testament to the quality and maturity of the technology,” Signorelli said.

"Our primary objective was to test our hybrid electric technology over time against realistic environments."

Featuring all HED components to be used in the GCV platform, including the traction drive system, thermal systems, engines, generators, controllers and software, the stationary, advanced Hotbuck test stand can also replicate real-life environments and terrain and put actual miles on the HED system.

The HED system is expected to ensure availability of high torque in the GCV at any ground speed leading to greater agility, acceleration and manoeuvrability compared to a mechanical system, and up to 20% less fuel consumption than a conventionally powered GCV, lowering overall costs and number of fuel convoys among others.

Work on the $449.9m TD phase contract, which was awarded by the army to BAE-Northrop Grumman team in August 2011, is scheduled to be complete by June 2014.

The Armored and Counter IED Vehicles Market in Brazil to 2024: Market Brief