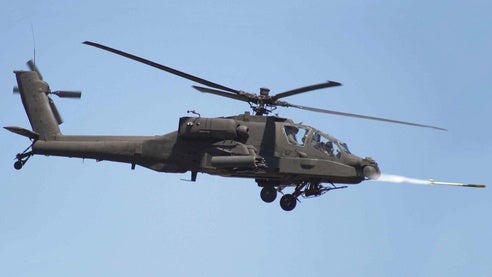 Bae Systems has successfully test fired its advanced precision kill weapon system (APKWS) rocket from the US Army’s AH-64D Apache helicopter as part of its efforts to obtain an airworthiness qualification for the helicopter for future international sales programmes.

Carried out at an undisclosed location, the flight testing involved firing of eight APKWS rockets from the Apache at extreme flight configurations with airspeeds up to 150k and at distances of up to 5km from the target.

The launch altitudes ranged from 300ft to 1500ft above the ground level, according to the company.

BAE Systems precision guidance solutions director David Harrold said the APKWS rocket has now successfully been tested on almost a dozen fixed and rotary wing platforms, with the completion of the Apache demonstration.

‘In particular, the final shot from the Apache hit within inches of the laser spot – despite the rocket and warhead being visibly scorched from two adjacent firings,” Harrold added.

‘This latest test demonstrates the precision and advanced capability that a guided 2.75-inch rocket will bring to Apache aviators.”]

"The final shot from the Apache hit within inches of the laser spot."

The rocket did not require any modification to the helicopter or software for installation, demonstrating the ease of integration that can prove critical to its successful deployment and adoption.

Equipped with BAE-built mid-body guidance unit (WGU-59/B), the APKWS is a semi-active laser guided 2.75in variant of the US military’s existing Hydra 70 unguided rocket system.

Fully compatible with autonomous and remote designator systems, the weapon allows for long-standoff engagements, and has one-third the cost and weight of other existing precision weapon systems.

BAE serves as the prime contractor for the APKWS rocket, which is supplied to international militaries through the foreign military sale (FMS) route.