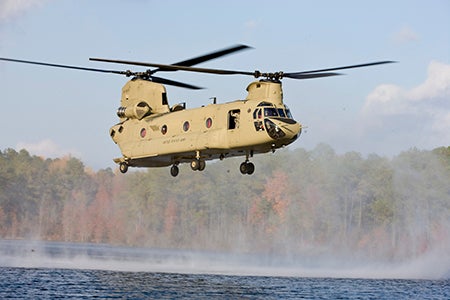 The Australian defence minister Stephen Smith said that ensuring the delivery of the aircraft were on-schedule and on-budget involved stringent work by the Defence Materiel Organisation (DMO) and defence industry.

The helicopters were delivered by Boeing in February to reduce pressure on the training and maintenance schedule for the Australian Army's CH-47D fleet, enabling better support for the two Chinooks currently deployed to the Middle East area of operations (MEAO).

The Australian Government had approved the acquisition of two retired US Army's helicopters in November 2011, following the loss of a CH-47D Chinook deployed in support of Operation Slipper in Afghanistan in May last year.

Featuring a triple-hook cargo system, the helicopter can also be used for medical evacuation, disaster relief, search and rescue, aircraft recovery, parachute drops, as well as fire-fighting missions in all weather conditions.

The Australian CH-47D fleet is scheduled to be replaced by seven new upgraded CH-47F Chinooks between 2014 and 2017.

An Australian Army's CH-47 Chinook helicopter is expected to return from operations soon, after suffering a hard landing at a Coalition force patrol base in Kandahar province, Afghanistan.

Image: A CH-47F Chinook transport helicopter during its flight. Photo: courtesy of Boeing.