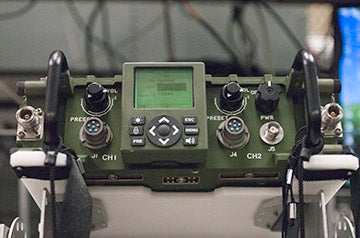 Multiple one-to-one voice and data calls, as well as conference calls were completed by two PRC-155 radios, connecting more than five participants during the demonstration, which represents a significant operational milestone for the radio.

The demonstration involved an array of realistic operational scenarios that included fixed-site locations around Anchorage and Barrow, Alaska and onboard aircraft flying throughout the Arctic Circle.

General Dynamics C4 Systems president, Chris Marzilli, said the PRC-155 radio is the first and only military radio to deliver secure voice and data connectivity with the MUOS system from the highest latitudes in adverse conditions.

”The success of this demonstration proves that with a MUOS-capable PRC-155 Manpack radio, soldiers operating in extreme and isolated locations will always be connected to the soldier’s network,” Marzilli said.

"Soldiers operating in extreme and isolated locations will always be connected to the soldier’s network."

The MUOS-capable PRC-155 radios are expected to enable troops to access the MUOS communications system anywhere in the deployed location, with a smartphone-like flow of information.

In addition, the radio was also used by GDC4S to connect AN/PRC-154 Rifleman radio to the on-orbit MUOS satellite in August 2013.

The MUOS system is scheduled to operate as a global cellular service provider, to provide soldiers with capabilities for direct communication with each other and their commanders virtually anywhere in the world.