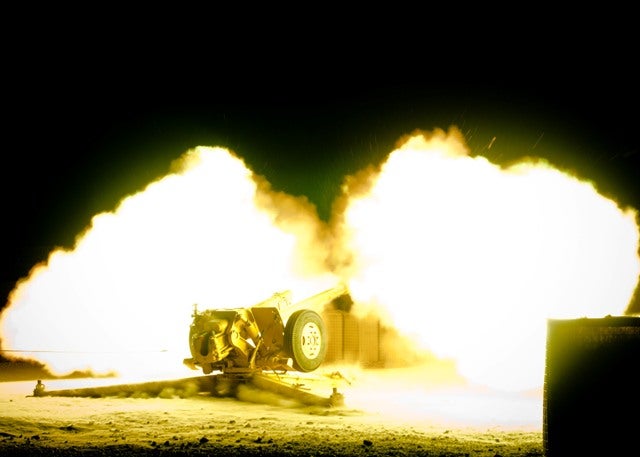 The Afghan National Army’s (ANA) field artillery unit has completed test firing of the first tactical rounds from its 122mm 2A18 (D-30) howitzer at Forward Operation Base Orgun-E in eastern Paktika province, Afghanistan.

Afghan Army captian Daswood Shah called the howitzer an ‘important capability’ and explained that the ANA would deploy the battery to conduct self patrols, in addition to providing support for its checkpoints.

Training in Gardez for the last several months, the unit learned the fundamentals of field artillery employment and was certified for tactical operations in late March, Shah added.

Sean Grubofski, US Army captain and 172nd Infantry Brigade 77th Field Artillery Regiment 1st Battalion Battery A commander, said that the test firing was the second step, with the first step involving occupying a joint firing point in Orgun-E and maintaining that position.

"The next step is tactically employing fires as an enabler for manoeuvre operations," he said.

The night illumination mission served as an important milestone for the Afghan Army’s gunners, according to Grubofski.

Grubofski said his team is serving as advisers for the ANA’s battery; it and provides training to the soldiers, both on the guns and in their fire direction centres.

"Currently they are effective with advisers," he added. "Over the next nine-month period, they will become effective in a partnered capacity. The final step is unilateral operations."

Grubofski said that the Afghan soldiers still have to overcome the biggest hurdle, which is the speed at which fire missions and delivery of rounds on their targets is carried out.