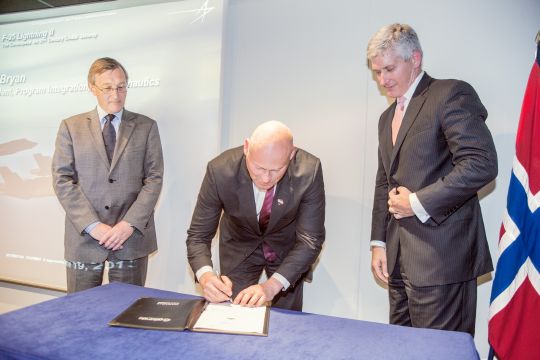 The contract, with the potential for several hundred sets, involves supply of 36 sets of parts for the production and assembly of F-35 in Italy, as well as covers surface coatings and final preparations for components of the tail fin on the F-35.

Norway will purchase around 52 F-35 aircrafts to strengthen its armed forces for future tasks as part of the project valued at around Nkr62.6bn ($10.2bn) real 2013 values.

The first four aircrafts, which were authorised by the Norwegian Parliament in 2011, will be used to train pilots.

"AIM Norway has a lot of potential, especially on the engine side, and can potentially be part of the support of all F-35s that will be operated or stationed in Europe."

This month, Norwegian Parliament allowed the government to order the first six aircraft in the main body of the procurement, which will be delivered by 2017.

Norwegian Ministry of Defence state secretary Erik Øwre Thorshaug said it was very important to the Norwegian Government that its defence industry has the opportunity to participate in support and maintenance of the F-35 throughout the service life of the aircraft, which will extend far beyond 2050.

"Here, AIM Norway has a lot of potential, especially on the engine side, and can potentially be part of the support of all F-35s that will be operated or stationed in Europe," Thorshaug said.

AIM Norway currently plays an important role by providing maintenance services for Norwegian F-16, and also hopes to provide similar services for the F-35 in the future.