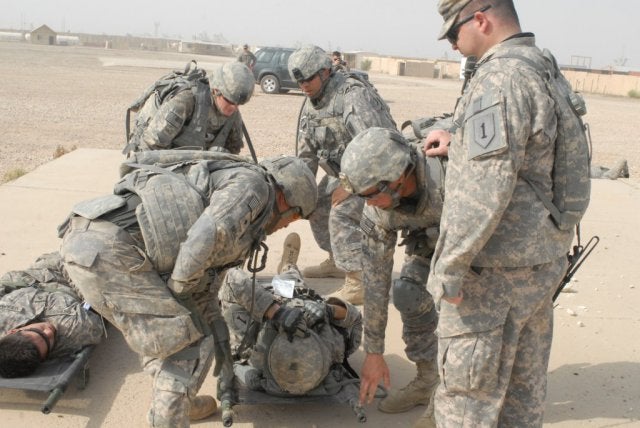 The shoulder straps distributes weight more evenly and also keeps the rescuer’s hands free, enabling them to operate weapons, call for assistance over the radio and navigate difficult terrain.

Agilite Strategic Development head Elie Isaacson was quoted as saying that the FlatEvac has been primarily designed to enhance the legacy four-man stretcher carrying operations.

Capable of folding up to the size of a carrier bag, with handle, the back-strapping rescue system unfolds to 70cm x 140cm so that the casualty can lie flat on it; it also features a drag option that helps a single person transport the injured to safety.

"The FlatEvac has been primarily designed to enhance the legacy four-man stretcher carrying operations."

Available in tactical black and a range of camouflage netting patterns and priced at $105 per unit, the stretcher has been manufactured using the company’s Tactical Tensile (TT) high-density polyester harness webbing and fabric materials.

Currently operational with the Israeli Defense Forces (IDF), US Marines, and British Army, the stretcher can also be used by search-and-rescue teams and outdoor adventurers. It is is also equipped with a built-in bag for storage of the casualty’s equipment.

The company has also recently launched a hands-free human backpack, injured personnel carrier (IPC), which uses a simple strapping system to help soldiers carry injured comrades on their backs, similar to a rucksack, away from the battlefield. IPC is also suitable for single-person rescue efforts.

The Body Armor and Personal Protection Market in Saudi Arabia to 2024: Market Brief

The Body Armor and Personal Protection Market in Israel to 2024: Market Brief

The Body Armor and Personal Protection Market in the United States to 2024: Market Brief

The Police Modernization Market in Saudi Arabia to 2025: Market Brief