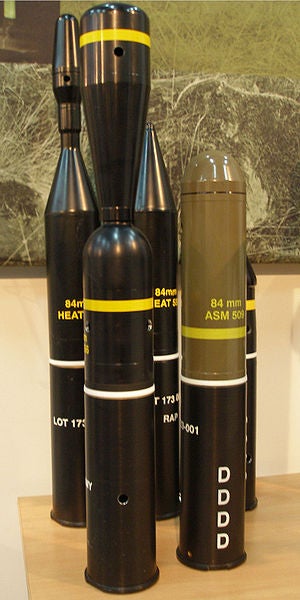 Saab has been awarded a contract by the Australian Defence Materiel Organisation (DMO) for the supply of additional ammunition for 84mm Carl-Gustaf M3 weapon systems.

The Skr199m ($29.7m) contract, awarded under a standing offer signed in early 2011, requires the company to provide the Australian Defence Force (ADF) with various versions of 84mm Carl-Gustaf ammunition.

The man-portable weapon system was selected by the ADF for future multipurpose service following several evaluations and assessments in late 2009.

The Carl-Gustaf is a reusable, shoulder-fired, multirole, recoilless rifle normally operated by a two-man crew in armour-piercing and anti-personnel operations using high explosive (HE), as well as smoke and illumination rounds, against a wide range of ground threats in all environments.

The weapon features a main tube with a breech-mounted Venturi recoil damper, a shoulder mount and iron sights, with the attached 3x optical sight offering a 300mrad field of view.

The iron sights are supplied with luminous front and rear sight inserts, along with an image intensification system for aiming during the night or in low visibility conditions.

The Carl-Gustaf can be fired from standing, kneeling, sitting or prone positions, with a bipod attached in front of the shoulder piece and a Venturi lock to move the hinged breech for reloading.

The system can be used as a feasible anti-armour weapon against larger stationary targets at a range of 700m, but the relatively low speed of the projectile restricts attacks on moving targets located up to 400m or less.

Deliveries under the contract are scheduled to take place in 2013.

The company also received a Skr166m contract for the supply of Carl-Gustaf M3 ammunition to the ADF in November 2011.

In addition to Australia, around 40 countries worldwide, including the US, UK, Belgium, Canada, India, Sweden, Germany and Malaysia, have acquired the weapon.