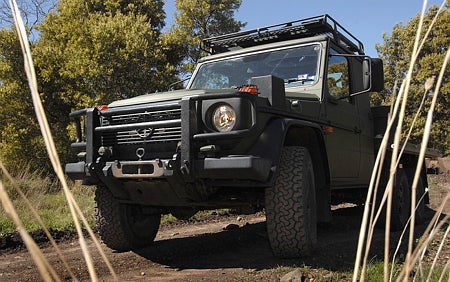 Mercedes-Benz has delivered an additional G-Wagon military support vehicle to the Australian Defence Force (ADF) at its facility in Mulgrave, Victoria, Australia.

Supplied with domestically manufactured trailers, the vehicle represents an overall 1000th Mercedes-Benz G-Wagon to have been delivered to the ADF to date as part of Phase 3A of the $7.5bn LAND 121 project.

Also known as Project Overlander, LAND 121 seeks delivery of more than 7,500 protected and unprotected vehicles, as well as modules and trailers to the ADF, including both the army and air force over the next ten years.

Commenting on the delivery, Australian defence materiel minister Dr Mike Kelly said the vehicles would ensure that Australian soldiers are better prepared and equipped, while ensuring they are ready for operations and providing the required flexibility to undertake a range of tasks in difficult off-road conditions.

"G-Wagon variants include utility, ambulance, surveillance and reconnaissance, mobile command post variants, and even a canine variant to transport military working dogs and their handlers."

Representing a big step forward for the ADF’s tactical training capability, the new variants are also scheduled to be operated for a wide range of support tasks.

Design and development of the varied modules and tray bodies is being carried out by GH Varley, while Haulmark Trailers serves as a sub-contractor to Mercedes-Benz Australia/Pacific for supply of trailers for use with the G-Wagons.

Available as the basic light utility vehicle, command and reconnaissance (C&R), and military police version, the vehicle is also operational with the Canadian, Danish, Estonian and German armies.

Image: A Mercedes-Benz G-Wagon vehicle of the Australian Army. Photo: courtesy of Commonwealth of Australia.