Non-US members of the North Atlantic Treaty Organization (NATO) will invest a further $100bn in defence spending, according to secretary general Jens Stoltenberg.

A NATO official told Army Technology: “At the Wales Summit in 2014, all NATO allies agreed to stop cutting defence budgets, increase defence expenditures as GDP grows, and aim to move towards spending 2% of their GDP on defence within a decade.

“We expect NATO defence ministers to address the reports on all allied national plans at their meeting next month. We will also release a breakdown of the defence spending figures for 2018 in the Secretary General’s Annual Report in March.”

The investment builds on a $41bn sum spent by NATO members since 2016.

In 2014, the 29 NATO members agreed to contribute 2% of their gross domestic product (GDP) on defence by 2024. Four nations – the US, Greece, Estonia, and the UK – have reached this target in 2018, while only fifteen are expected to reach the threshold by the agreed date.  However, over the 2014-2018 period, defence spending by the US and the UK has actually decreased. 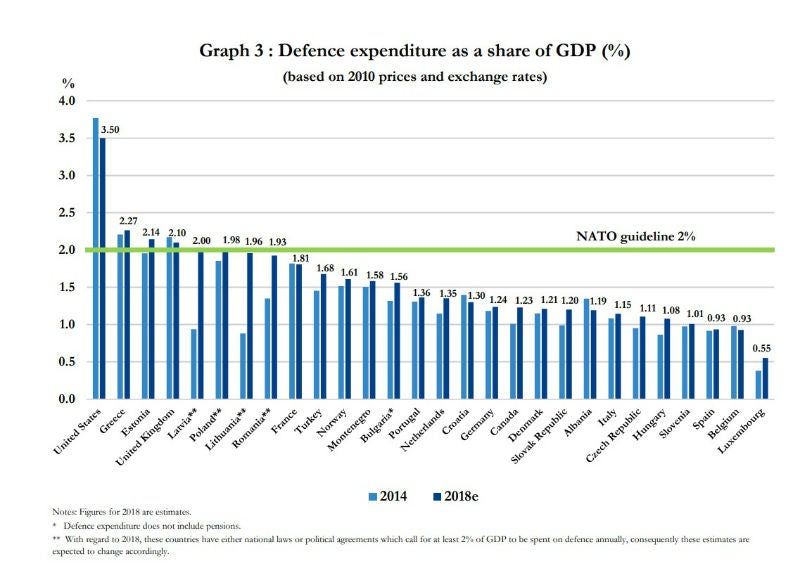 “We expect NATO defence ministers to address the reports on all allied national plans at their meeting next month.”

Stoltenberg reiterated on Sunday that European members of NATO have acknowledged President Trump’s call for non-US members to shoulder a greater financial burden, and will subsequently boost their participation in the form of a large investment.

Stoltenberg told Fox News: “President Trump has been very clear. He is committed to NATO…but at the same time he has clearly stated that NATO allies need to invest more. So we see some real money and real results, and we see that a clear message from President Trump is having an impact. NATO allies have heard the president loud and clear. NATO allies are stepping up.”

The call for greater investment has come after US President Trump publicly criticised non-US members for failing to meet the 2% threshold. At a NATO summit in Brussels in July, Trump referred to other member governments as ‘delinquents’ for not contributing their share.

On 14 January, the New York Times reported that Trump told senior officials “several times” of his intentions to leave NATO throughout 2018.