The US Defence advanced research projects agency (DARPA) has completed a preliminary design review of a two-stage tactical missile system.

The booster designed under the agency’s Operational Fires (OpFires) programme will form part of a future ground-launched hypersonic weapon system for the US Army.

“The goal of the Operational Fires (OpFires) program is to develop and demonstrate a novel ground-launched system enabling hypersonic boost-glide weapons to penetrate modern enemy air defences and rapidly and precisely engage critical time-sensitive targets,” DARPA says on its website.

US Army programme manager for OpFires Major Amber Walker said: “US ground-based forces currently are limited in effective range of surface-to-surface precision fires. The goal for OpFires is to provide the combatant commander with options in force deployment, and allow persistent standoff from unpredictable land-launch positions.”

The focus of the programme’s first two phases is to develop propulsion technologies to deliver a range of different weight payloads across varying ranges.

Phase one of the competition ended last autumn with contracts being awarded to Aerojet Rocketdyne, Exquadrum and Sierra Nevada Corporation.

DARPA expects to be able to put a booster through a critical design review towards the end of 2020 following 30 motor trials. 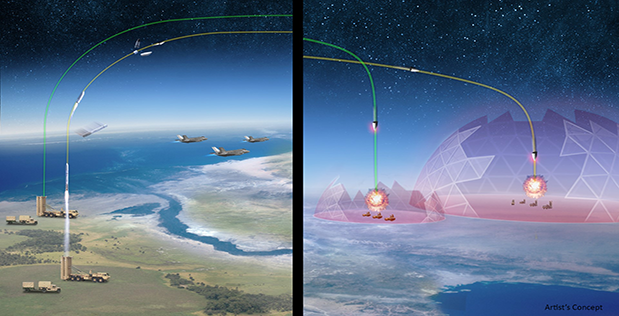 “Development activities will continue under Phase 2, which will culminate with multiple hot/static fires targeted for late 2020.”

DARPA says it expects to award further contracts for the third stage of the programme towards the end of this year.

The third stage of the programme will develop the boosters into operational systems. DARPA aims to hold flight tests of the weapons in 2022.