The COVID-19 pandemic has forced governments to focus their spending on healthcare and safeguarding the economy, which could possibly result in shifting priorities away from defence. Some Asian countries have already announced cuts to their defence budget for the year.

Verdict has conducted a poll to assess whether defence budgets will be shielded by the impact of the COVID-19 outbreak.

When asked whether defence budgets will be shielded from a COVID-19-induced downturn, 69% of the respondents anticipated at least a partial impact of the coronavirus outbreak on defence spending.

While a majority 45% of the poll respondents voted that the COVID-19 outbreak will have an impact on defence budgets, less than a quarter (24%) of the respondents felt the impact would be partial.

Less than one-third (32%) of the respondents opined that COVID-19 will not have any impact on defence budgets.

Analysis of the poll results, thus, shows that the outbreak is expected to impact defence budgets, at least in the near-term. 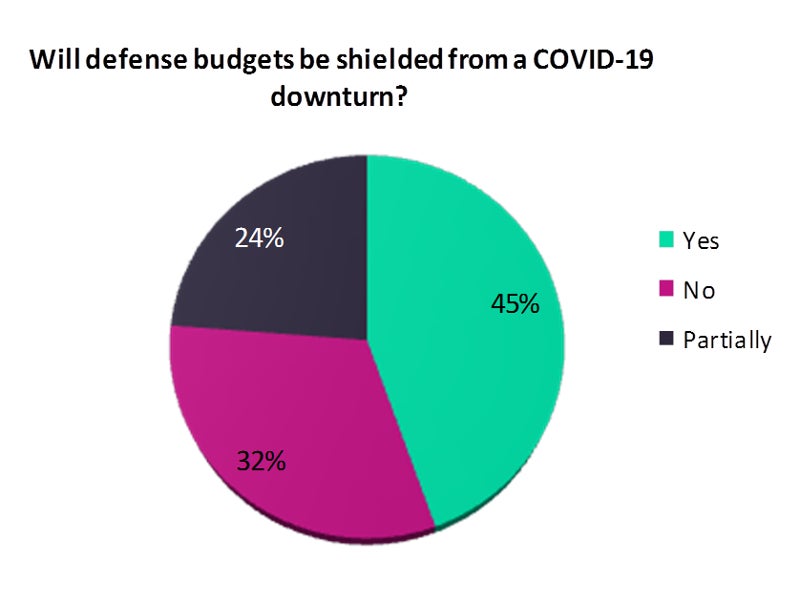 The global defence spending exceeded $1.9tn in 2019 marking the highest since 1988, according to a research conducted by Stockholm International Peace Research Institute (SIPRI).

In 2020, the world is battling to overcome the devastation caused by the COVID-19 pandemic forcing governments to shift their priorities towards other areas of the economy. The SIPRI, based on data from previous economic downturns, notes that future defence expenditure is expected to be impacted.

India and Thailand are some of the first countries to have announced a reduction in defence expenditure amid the COVID-19 crisis.

The Philippines is expected to increase its defence expenditure at 9.41% between 2021 and 2025, although expenditure may be impacted in the short-term due to COVID-19, says GlobalData.

China is also expected to grow its defence budget despite the impact of the pandemic, although official figures are yet to be announced.

Experts such as NATO Secretary General Jens Stoltenberg and EU’s chief diplomat Joseph Borrell have, however, highlighted the need to keep up defence expenditure despite the uncertain economic conditions.

In an article published on EURACTIV, Borrell noted that although the focus is on economic recovery, EU member states should focus on securing funding for defence as the pandemic has brought new security threats.

Stoltenberg also noted that NATO members should ensure defence spending is maintained in order for them to defend themselves, as quoted by Reuters.