The future of NATO’s modernisation plans to upgrade its fleet remain uncertain at a time when aerospace and defence contractors are being affected by the global and local disruptions caused by COVID-19.

Contractors have been forced to shut down manufacturing plants due to lockdown measures, while the grounding of flights has led to uncertainty regarding future orders.

Verdict has conducted a poll to assess whether NATO’s modernisation plans will be disrupted due to the COVID-19 outbreak.

Get the free report

The percentage of respondents who anticipate at least a partial impact on the modernisation plans stands at 75%. 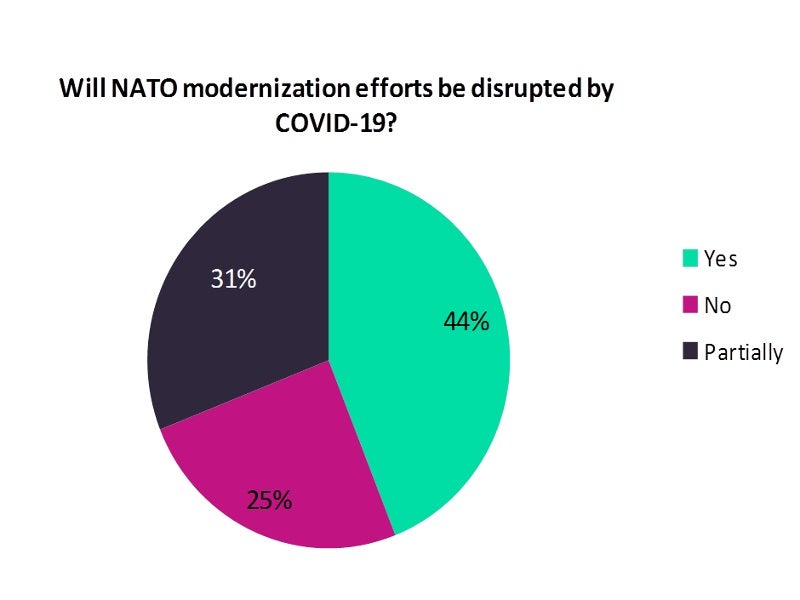 The analysis is based on 946 responses received between 04 May and 18 May.

The AWACS was awarded to Boeing, to keep the aircraft in service until 2035. Boeing, however, has been impacted by the COVID-19 lockdown measures. The company has been forced close manufacturing plants possibly delaying the project.

The AGS aircraft are being procured by 15 allies of the NATO, which will maintain it on behalf of the allies.

The first two AGS aircraft were delivered in 2019 by Northrop Grumman, which has warned of potential impact of the COVID-19 outbreak including an increase in borrowing costs and disruptions to customers and operations.

The company was able to weather some of the impacts of the pandemic as sales increased across all business units, according to GlobalData. Operating income, however, has declined, indicating a supply chain disruption which may impact the company’s deliveries including the AGS aircraft.

NATO’s other procurement programmes such as the Multinational Multi-Role Tanker and Transport Fleet (MMF) has remained unaffected as the first two aircraft are scheduled to arrive in June.

Although NATO Secretary General Jens Stoltenberg has urged allies to keep up defence expenditure, experts such as Robert Baines, president and chief executive officer of the NATO Association of Canada, noted that the ability to justify large procurement projects will become harder due to the economic turmoil caused by the pandemic, as quoted by CBC News.