Under armour: the US Army’s new soldier protection system
Menu

After several years of research and development, the US Army is now in the process of fielding its new Soldier Protection System, a next-generation suite of personal protective equipment that promises to be lighter and more tailorable to meet individual soldiers’ needs.

Fielding the new technology ensures that US troops retain their lethality, which is one of the army’s key priorities as it moves forward with several modernisation streams under the new US Army Futures Command.

The officer responsible for the Soldier Protection System notes that many of the new additions have been incorporated to aid soldier mobility and lethality. “The more mobile you are, the more survivable you are,” says Lieutenant Colonel Ginger Whitehead, product manager for soldier protective equipment at the US Army’s Program Executive Office (PEO) Soldier. “Anytime that you are decreasing the weight that a soldier carries, and giving them more range of motion, that enables them to move better on the battlefield.”

Adapting for the future

“Part of the push for this new system was that we were looking for a system that was tailorable, where you can scale it up or you can scale it down depending on your mission, the threats and the terrain,” Whitehead continues.

That was not possible on previous soldier protection equipment and Whitehead points out that this was particular important as frontline combat roles are progressively opened up to women.

“There are greater opportunities for women and so we are tailoring our gear to accommodate women, and even the smaller statured men, and they are benefiting from the changes we’ve made,” she adds.

“There are greater opportunities for women and so we are tailoring our gear to accommodate women, and even the smaller statured men, and they are benefiting from the changes.”

One example of this is replacing the “X-formation” retention strap mechanism with an “H-formation” variant, which greatly improves a female soldier’s comfort when the hair is in a bun. Another element is increasing the size range of ballistic armour plates that a soldier can choose from, especially as smaller soldiers do not need to have larger (and heavier) plates. Whitehead says there will now be three smaller plates, learning lessons from previous “cookie cutter” approaches where one size had to fit all.

While these two elements are ultimately unisex, a new ballistic combat shirt (that provides deltoid protection) will be gender specific. For the women’s shirt, there will be a “V-notch” in the back of the collar to accommodate a bun, which is important when a female soldier is lying on her front and looking through her rifle optics. Other changes for the female variant include a shorter sleeve and a wider sweep to prevent the shirt from riding up the body. 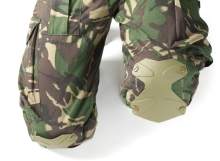 The new modular scalable vest – which Whitehead notes is the “crown jewel” of the Soldier Protection System – replaces the Improved Outer Tactical Vest (IOTV) which was introduced in the latter years of the Iraq War. The goal was to make the new vest as light as possible, and pushing the envelope in terms of materials and new technologies.

The vest can be adapted in such a way that in its lightest form it can be worn under civilian clothing, while the heaviest configuration can protect against a myriad of battlefield threats. For added safety, particularly in terms of removing soldiers from burning vehicles or aircraft, there is a four-point quick release system on the vest.

Protective undergarments have also been improved. Previous configurations were generally unpopular with soldiers as they often gave them a “perpetual wedgie”.

“Soldiers hated it,” says Whitehead. “And if a soldier hates it they are less likely to wear it, it’s hot and it chafes. So we have replaced that with the blast pelvic protector, a one-piece unisex [system] that goes on the outside of trousers, and on each leg there are multiple buckles to adjust for hip circumference and thigh size. I’m getting much more favourable feedback.”

For the future, the US Army is eyeing emerging technologies and materials including ultra-high-molecular-weight polyethylene composites, with studies looking at its use in protection gear such as helmets.

Whitehead notes that the developers are also looking at the use of next-generation Kevlar and even biologically engineered spider silk. The US Army is currently working with Kraig Biocraft Laboratories to develop a strain of genetically engineered silkworms for protective textiles.

Ceramics in the soldiers’ hard armour plates still drive much of the weight in protection systems, with Whitehead explaining that the service is constantly looking at new blends of materials that make ceramics lighter, yet harder. This includes boron carbide, one of the hardest materials on earth, as well as silicon carbide.

The incoming VTP will leverage some of these advancements, with the army hoping that it will achieve between 7% and 30% weight savings over its predecessor.

“Every ounce matters in this business. The hard armor plates drive half of the weight of the SPS. So wherever you can find ways to cut weight without sacrificing protection.”

“That’ll be pretty exciting and it will still provide the same level of protection,” says Whitehead. “Every ounce matters in this business. The hard armor plates drive half of the weight of the Soldier Protection System. So wherever you can find ways to cut weight without sacrificing protection, we are constantly pushing that.”

The new modular vest, blast pelvic protector and helmet are now being manufactured in large quantities and fielded to troops being deployed on the frontline, while the advanced VTP still has over a year to go before it enters mass production.

“So we are quickly converging and it’s exciting that here in the not too distant future we’re going to be able to equip the entire ensemble to troops that are going into harm’s’ way,” Whitehead concludes.