DCE’s participation in The British Army ’s Army Warfighting Experiment 2018 helped shaped the way the armed forces look at autonomous systems and the implementation of UGVs.

This rapid rise exemplifies the company’s ethos of transferring expertise and technological know-how across different fields to quickly deliver capabilities. Other recent examples of this approach include a self-driving hospital bed and social distancing sensors.

“The [British] Army approached us at DSEI in 2017 and said, ‘Your literature says you ‘do’ robotics. We are interested in what’s out there for a programme that we’re planning to run called the Army Warfighting Experiment in 2018. We want to understand how robotics will help us on the battlefield of the future.’,” DCE director Lionel Nierop recalls.

“We said, ‘Well, absolutely, we’d love to talk about it. And we’ve got a control system here that you can fit to anything so we can take any of your vehicles and make them robotic.’”

Initially, the army’s interest was in the X-2, a small tracked platform based on the original agricultural project. DCE had more to offer, though, specifically the underlying control system which could be attached to any vehicle to make it robotic.

DCE proceeding through the funding application process with its control technology, but at the time the army was interested in full systems, not isolated capabilities. After some back and forth, Nierop explains, the utility of the control system was eventually recognised when the army asked DCE whether it could be deployed on the Warrior infantry fighting vehicle.

In late 2018, DCE controlled UK’s first optionally crewed Warrior, drawing the attention of teams working on similar projects from the US. Although developments of the optionally crewed Warrior seem to have dropped lower on the army’s list of priorities since then, Nierop says the success of the trial showed the level of transformational capability small companies can deliver when working alongside the armed forces.

“To put that into some sort of context, we were told by a US Army representative that they were particularly interested in what we were doing because the US had been quoted two years and $1.5m to do exactly the same thing on the Bradley infantry fighting vehicle,” Nierop adds. “So the fact that a small British business had turned this around for under £100,000 and in six weeks was making them ask some fairly serious questions about where their money was going.”

The success with the Army Warfighting Experiment resulted in further work with the US on an optionally crewed fighting vehicle, and eventually a recent bid for the Robotic Combat Vehicle Medium programme as part of a consortium between Merill Technology Group, DCE and a UK-based vehicle manufacturer. 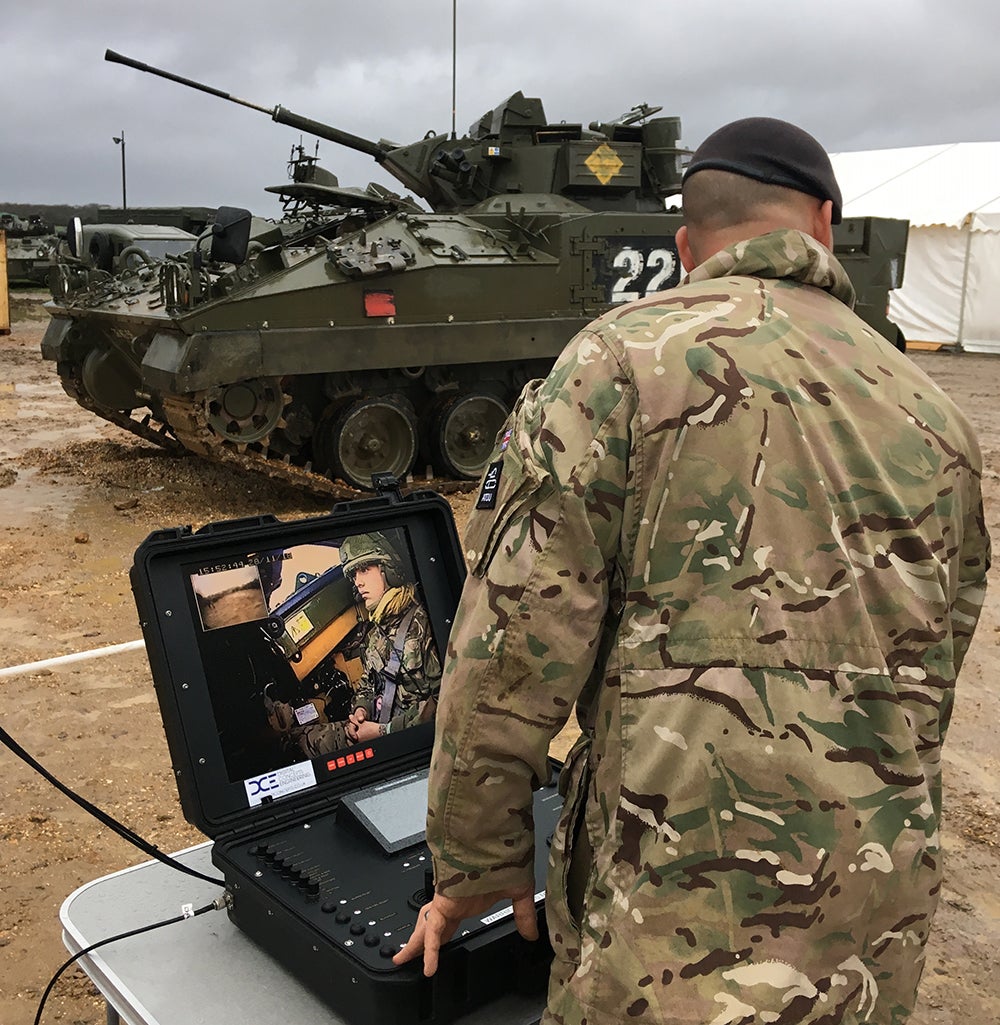 A key factor in the DCE-consortium bid for the Robotic Combat Vehicle programme is the potential mobility offered by a purely robotic system. The consortium’s offering (although still not public) is built around a number of concepts including amphibious capability and the option to tackle horizontal and vertical slopes that a traditional crewed vehicle would not be able to confront.

The programme itself, Nierop says, offers an opportunity to rethink vehicle design. “From our end, the key thing is that often vehicles get built around protection,” he explains. “That’s why OMFV in the US have reappeared so many times. One of the big challenges has always been around survivability, and that’s led to a huge amount of vehicle weight growth.

“Our position is that if you have a vehicle that is optionally crewed or robotic, then you can get away from the survivability issue in two ways. One, for a vehicle that is purely robotic, you can drive down the cost substantially because you don’t actually need to up-armour it.

“Protection can also be reduced; you can look at low-cost weapon stations. Rather than a full calibre turret, you might be looking at something with a lighter weapon and a few anti-tank missiles, meaning you could bring the vehicle in at under £1m and potentially comfortably under that. Whereas if you’re looking at something that’s crewed, you’re probably looking at closer to £5m.”

This presents a question for the future battlefield, and whether it makes sense to prioritise one crewed system, which has the added danger of putting a human in the field, or whether that crewed system could be replaced with five uncrewed vehicles that do the same job.

What’s next for DCE

DCE’s roots were in consulting for the prime defence contractors such as BAE Systems , Northrop Grumman , and Alvis Vickers ,” Nierop tells us. Over time, this evolved into the core expertise in robotics and control systems that make up the company’s main product offering today.

Now DCE is positioning itself as a close partner of the armed forces while working alongside partners to fill in the gaps of expertise when it comes to technology development.

“We recognise we can’t do everything and we recognise that would not be a sensible approach either,” Nierop says. “So we are trying to stick to our core expertise but are working with other companies who have complementary capabilities, and who are working on other programmes as well. We’re not necessarily dealing with ‘tier ones’.”

The fact that defence budgets are tight, and in the current climate could get tighter, is likely to affect the place DCE carves out for itself in the market. Nierop says the company is looking for investors to expand its operations, while also looking to develop a consortium that could deliver transformational capabilities at a lower cost than traditional defence programmes.

“We are not saying that we’ve got all the answers to what they want,” he concludes. “But we are saying that we have some thoughts about that. And that we will work with the MOD, Dstl and the army, and other companies working in the space, to try and produce solutions to those future capability requirements.”