Armoured fighting vehicles: which is better, tracks or wheels?
Menu

When it comes to wheeled vehicles a few stand out as equally advanced as they are fearsome. The General Dynamics Piranha V, Stryker, and the Rheinmettal Boxer are some of most technologically advanced infantry fighting vehicles on the market, but they wouldn’t be able to get around if it weren’t for a Neolithic invention.

We’ll wade into the seemingly endless debate of whether wheels or tracks are better by pointing out some of the significant advantages of the former. One of these pros is speed; simply put wheeled vehicles can go faster – albeit surface permitting. Put a tank side by side with a wheeled vehicle on a city street and there is no contest.

The inability of tracked vehicles to get around a city without causing damage came into focus earlier this year in the US, when authorities in Washington, DC said they would destroy the capital’s streets if deployed in a Fourth of July military parade.

Of course tearing up the streets of a city doesn’t matter too much when it isn’t your own city but rather one in a far-flung corner of the globe. However, due to the nature of cities’ tight, close-quarters firing lines, slowly hulking through the streets on tracks makes you an easy target for a combatant with a rocket-propelled grenade. The faster speed of wheeled vehicles, on the other hand, comes into its own in these environments.

A 2017 RAND corporation report commissioned by the Australian Defence Science and Technology Group details how this became a problem for the US during the NATO peacekeeping mission in Kosovo. The report reads: “The heavy American M1A1s and the M2 Bradley IFVs particularly angered many locals because their treads damaged many fields and road systems. Also, the larger vehicles’ inability to navigate urban terrain led to additional casualties.”

Maintenance and ease of repair is another positive to using wheeled platforms over tracks. If a tank is hit and the track becomes separated it is rendered immobile, whereas if a tire is blown, thanks to run flat technology, the vehicle can usually travel far enough to get out of danger.

Stealth is another area where wheels work well. Moving a tracked vehicle takes more force due to their larger size, and more force equals more noise, whereas wheels lend themselves to a quieter approach. This sentiment is a focus of a 1998 US report into the merits of both systems saying: “On the plus side, wheeled platforms provide a reduced noise signature while moving, primarily due to less vibration and metal to metal contact on running gear.”

Track to the future

When your mission takes you off the beaten track – as combat so often does – wheeled vehicles tend to run aground. 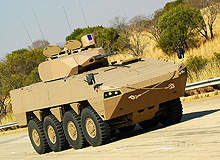 The US report explains: “From a mobility perspective, tracked vehicles offer the best solution for a versatile platform that is required to operate over diverse terrain, including extremely difficult ground.” Where wheels get bogged down, tracks with their increased surface area and drive provide a better solution.

Another area where tracked vehicles excel is payload, and again this lies in surface area. The amount of armaments and armour a tank can carry is made possible by the vehicle’s capacity to carry it. A wheeled system loaded with a comparable weight would sink and be immovable as soon as it hits even slightly boggy terrain a wheeled system, rendering it useless to the fight.

As the RAND report puts it, “tracked vehicles have shown their advantages in off-road mobility, flexibility in weight growth, and ability to fight and survive on the battlefield”.

Tracked vehicles also have benefit of increased survivability, especially when faced with small-arms fire. A British Army Field manual describes how heavily armoured vehicles negated the use of small-arms fire in Basrah during the Iraq War, allowing troops to be moved safely. With recent combat operations involving Western nations being geared heavily towards counter-insurgency, the ability to manoeuvre while staying protected is a clear advantage of tracked systems.

The merits of survivability are also discussed in the 1998 US report which says: “From a survivability perspective, tracked vehicles offer smaller silhouettes, reduced volume, enhanced manoeuvrability, and better ballistic protection, providing a balance that equates to a more survivable platform.”

This survivability goes a long way to protect the troops inside the vehicle, making tracked vehicles a superior option for getting soldiers from A to B – albeit slower.

Another thing tracked vehicles have in their favour is manoeuvrability when it comes to changing direction. Tracks allow vehicles to turn on the spot making it easier to aim and navigate. This is where tracks juxtapose themselves. While they are slower and heavier in an urban setting, they can navigate tight  urban spaces easier due to their pivot-steering.

The ability to turn on the spot and take cover in an alley means that in tight situations, a tracked vehicle can scuttle away while one with wheels could be caught trying to perform a three point turn. This pivot turning is also useful when tight mountain trails, only increasing tracked vehicles’ off-road performance.

“The distinctions between vehicle classes are blurring with the introduction of new technologies and systems,” reads one of the key findings of RAND’s report.

This doesn’t mean a WWII style half-track re-entering the fray. But new hybrid systems are in the making, for example in the form of DARPA’s reconfigurable wheel track (RWT) system which asks the question of why not have both? The system operates like a traditional wheel but can instantly transform into a triangular track.This system – fitted on a Humvee, not an AFV– unites the merits of the two approaches giving speed and traction as required. The development is still a long way from being adopted into service, but is part of DARPA’s wider push for mobility under the Ground X-Vehicle Technologies programme to reduce the size and weight of vehicles and make conquering a variety of terrains a feat achievable by most of the US military’s land systems. These technologies, however, are still early in development with no word as to when they may enter service.

Ultimately the decision as to what system is better lies in the question of where you are going. With combat environments rapidly changing, future systems may need to bridge the divide of tracks and wheels to keep pace.