For the white-collar worker, video conferencing is the new norm. It’s even spilled over into healthcare, with telemedicine on the rise due to the outbreak of Covid-19. But there’s more to how technology will change the future of work than video calls and Slack messaging.

It is undeniable that the blurred line between home and office is changing business. One sign of the shift is BT’s launch this month of a new dedicated business unit in the UK to target the SoHo (Single/Small office/Home office) market, which includes more than 95% of the country’s private sector companies.

As early as May 2020, BT had already committed to connecting 20 million households and businesses with fibre over this decade, investing US$14.5 billion (£12 billion) to achieve it. This huge programme of work seems likely to be justified in the wake of the 2020 shock as more businesses downsize their offices and more employees work increasingly from home.

The shift will reach beyond the pandemic; the future of work will be shaped not only by fibre but also by 5G technologies and the new capabilities these things will bring to collaboration, visualisation and connectivity.

How technology will change the Future of Work: Collaboration

A recent GlobalData report on the telco sector notes that the global total of fixed wireless access (FWA) accounts for business and residential were 32.4 million in 2020. While FWA only accounted for 2.5% of fixed broadband lines globally last year, it grew in 2020 at 13.7% year-on-year (YoY). Post-pandemic, GlobalData forecasts growth of global FWA accounts will stabilize to a CAGR of 7.5% over 2021–2025.

"The COVID-19 pandemic has given way to this rise in appreciation for fast, reliable, and strong home broadband as the world continued to operate from home under lockdown conditions," says Madison Galati, Telecoms Market Data & Intelligence analyst at GlobalData.

"The demand for home broadband led some operators, like BT and TIM Italy, to speed up their fibre network rollout. Furthermore, with employees’ preference for a hybrid/remote working environment post-pandemic, this demand for faster, stronger, and more reliable home broadband will continue and present further monetisation opportunities for telcos."

Surveys by GlobalData have found that 44% of employees want to work in a hybrid environment between home and office. What this means is more growth in collaboration, one category of the five GlobalData analysts have identified as the framework of the Future of Work in an overarching thematic report.

The analysis notes that Covid-19 has meant a huge boost for collaboration platforms. Microsoft, for example, reported that 44 million people used its Teams software on 18 March 2020, 12 million more than the number of daily active users it had one week beforehand. Following the same trend, work communication platform Slack revealed its revenue for the three months to the end of April 2020 was $201.7m, up 50% YoY.

Collaboration, however, is more than online communication. It also includes customer relationship management (CRM) platforms such as those provided by Salesforce and Oracle.

“The CRM marketplace has become a battleground for vendors, as customer experience is now a strategic imperative for companies of all sizes,” the GlobalData analysts write.

The CRM marketplace has become a battleground for vendors, as customer experience is now a strategic imperative for companies of all sizes.

“Once primarily a solution for helpdesks, sales contact management, and lead tracking, CRM solutions are evolving and expanding to adjacent areas such as marketing and partner management.”

The most active CRM company in M&A is Salesforce, which has announced several major acquisitions since January 2018. They include the $15.7bn purchase of Tableau and the $6.5bn takeover of MuleSoft. These two deals gave Salesforce greater access to enterprise data, no matter where it is stored.

More recently, Salesforce announced it would acquire Slack for $27.7bn. As a result Slack will be deeply integrated into every Salesforce Cloud and act as the new interface for Salesforce Customer 360.

The company to look out for, however, is Facebook. The social media giant’s Workplace software tool is making bold strides away from the consumer market into enterprise, with more than 200 million customers as of May. Within that base are 30,000 organisations using Workplace, including seven million paid subscribers to the platform.

With free trials and monthly per-user pricing currently starting at $4 for smaller organisations/teams and $8 for complex ones, the attraction to Facebook is clear. Competitors will therefore need to prove their worth on factors other than price as collaboration changes in the future of work.

Facebook’s investments in next-stage technologies such as virtual reality (VR) may also dovetail with its business interests further down the line. This is because visualisation is another key element of the future of work.

“Visualization involves the use of images or graphics to convey information or communicate a message,” write the GlobalData analysts. “Workers today are required to aggregate, analyze, and interpret vast amounts of data.”

In the digital era, workers have a new set of tools through which to handle complex tasks and interact with an ever-changing and expanding amount of information.

Data visualisation is one example: tools which incorporate animation, interactivity and multimedia to speed up analysis and facilitate decision-making.

Digital twins, meanwhile, can be used to replicate production processes in the virtual world. While applications in the office are currently limited, digital twins might offer decision-makers an overarching visualization of operations. By making use of a 3D map, for example, a digital twin can provide real-time monitoring of building spaces to reduce energy wastage, optimise use, and even limit disease spread.

Extended reality (XR) may be another answer to how technology will change the future of work. Augmented reality (AR) headsets and smart glasses can be used to access online environments, like Spatial’s collaboration platform in which workers use 3D avatars in a virtual workspace.

Microsoft meanwhile offers Mesh, a mixed-reality, cloud-based meeting app that can allow a person to digitally access a remote location for shared experiences. This enterprise-grade solution is ideal for work revolving around 3D physical models. 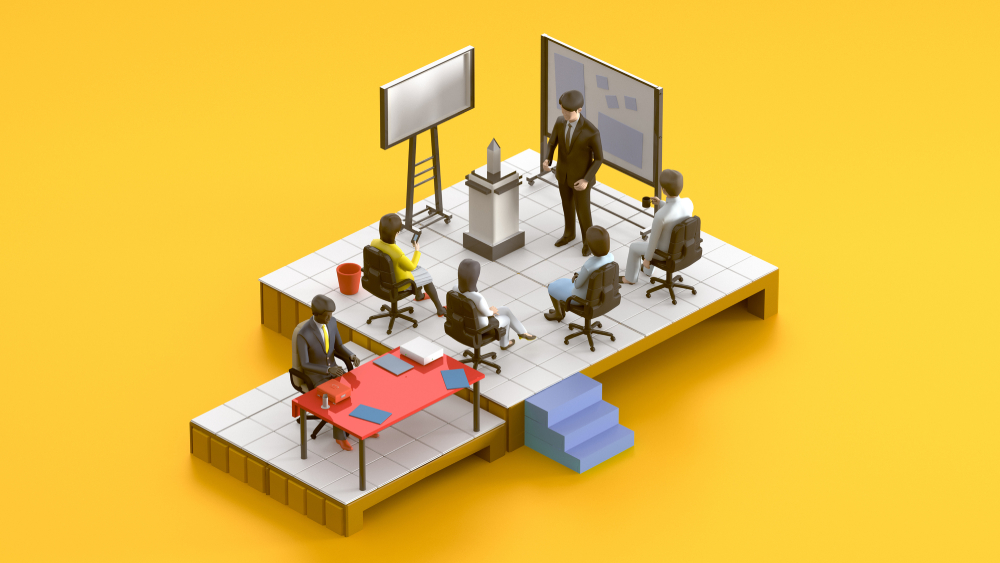 How technology will change the Future of Work: Connectivity and 5G

Almost all of these cutting-edge technologies belong to the Internet of Things (IoT) ecosystem, where a system of connected sensors and actuators control and monitor the environment, and the things and people that move within it.

As Verdict recently reported, IoT is potentially an even more pervasive kind of tech than today’s computers and mobile devices, but it isn’t pervasive as things stand.

Broadscale 5G adoption needs to take off for the next stage of pervasive IoT to happen. The resulting “massive IoT” will entail the use of low cost sensors and long life batteries for smart meters, cities, buildings and homes, along with fleet management across a wide area as opposed to the localised kind of 5G coverage that is currently enabled.

5G will transform communication infrastructure by allowing for faster data speeds. Second-tier cities will benefit from this coverage, which is crucial as many small and medium-sized enterprises (SME) are based in such cities.

Second-tier cities will benefit from 5G coverage, where many SME are based.

Smaller cities are also where commuters may be found, the very ones aspiring to hybrid working in the wake of coronavirus.

Global Workplace Analytics predicts that 25% to 30% of the global workforce will be employed at home on a multiple-days-a-week basis by the end of 2021. But no matter where home may be, enterprise-grade broadband internet can be there too as 5G network slicing can be used to deliver business-level internet to remote workers.

GlobalData forecasts that with an ageing workforce, robots will perform more and more tasks in warehouses, hospitals and retail stores, leading to a rebalancing of work between man and machine.

What will truly drive this change is the use of artificial intelligence (AI) to make smart robots, machines which use machine learning to improve at tasks and automate what previously could only be done by humans. They already exist, and, as Verdict has recently discussed, businesses are learning to love them.

This rise of the smart robots has, again, been given a helping hand by the pandemic. A report last year by GlobalData on its impact on industrial automation noted that the virus affected factory workforces worldwide, meaning that organisations which had invested in robotics as part of an automation strategy were more likely to keep running during the crisis.

One example is packaging giant Berry Global, which during the pandemic faced staff shortages at its Kentucky, US plant. The solution was the deployment of almost 20 autonomous mobile robots (AMRs) to ensure production could continue 24 hours a day, seven days a week.

Preventing the spread of coronavirus also saw robotic solutions deployed in the retail sector. Asda of the UK trialled robots in three stores during 2020 that could follow a cleaning route mapped out by staff. Like giant smart Roombas, the co-bots sense when obstacles of the physical or human sort are nearby, and either stop or move around them.

AI in robots is just one part of the picture, though. The intelligent tech’s powers of interpretation means companies can handle increasingly complex information and make predictions based on that data deluge.

AI platforms are likely to transform industries because they can automate decision-making. Better decisions and lower cost of prediction means more productivity gains for businesses, and as such interpretation will be the fifth mechanism through which technology will change the future of work.

How technology will change the Future of Work: Interpretation

A study from the Brookings Institute predicts that, in the US, “routine” physical and cognitive tasks will be most at-risk from automation and AI over the next decade. Jobs in office administration, production, transportation and food preparation are deemed to be vulnerable, with over 70% of their tasks potentially automated.

However, the research finds that high risk jobs represent only one-quarter of all jobs. AI is more likely take over specific tasks within jobs rather than displace entire occupations. And it’s not just the white-collar class who can breathe a sigh of relief.

GlobalData notes that the more secure jobs in an AI future will range from professional and technical roles to “low-paying personal care and domestic service work characterised by non-routine, abstract activities and social and emotional intelligence.”

It’s likely that automation will have a greater impact on the future of work than Covid and the gig economy. The latter is increasingly seen as an unsustainable business model, as proven by Deliveroo’s disastrous public debut this year. Major investors had expressed concerns about the company’s use of gig economy workers. Startup Starship Technologies with its food delivery robots seems more like a glimpse of the future than Deliveroo with its low-paid contracted-out riders.

Food delivery robots seems more like a glimpse of the future than Deliveroo with its low-paid contracted-out riders.

At the end of the day money talks, and with GlobalData’s thematic research on artificial intelligence suggesting that the market for AI platforms will reach $52bn in 2024, it’s clear where the future of work is most likely headed.

View All
View All