Since the inception of combat, darkness has limited the ability of soldiers to operate and complete missions, but with modern optics technologies, troops and vehicles can see further, and in more detail, than ever before.

At DSEI in September, Qioptiq showcased a suite of vision enhancing technologies, from dismounted soldier sights and heads up displays for fighter aircraft to long-range surveillance tools deployed on armoured fighting vehicles and supporting equipment.

The company’s sights and cameras use a combination of cooled and uncooled thermal imagers and image intensifiers which are either used exclusively or in what is referred to as ‘blended’ systems.

“To see at night, several methods have been developed,” Qioptiq explains. “You can illuminate the scene you wish to observe; you can use intensification of the visible light reflected by the scene; and you can use thermal imaging – or a combination of these.”

While most night-vision systems use image intensifiers, thermal imagers work in complete darkness using heat, rather than available light to find and locate targets. In these systems a lens detects infrared energy emitted by the target, which is then converted into a picture, usually using blue to red colours to indicate hot and cold areas. The ability of these systems to work in no-light is essential, allowing users to find and locate targets in ‘total darkness’, but with the drawback of lower fidelity.

Image intensifiers, on the other hand, do just that, intensifying the light received by the sensor and cleaning up the picture to reveal more details than what would normally be seen by the human eye. The picture is reconstituted using colours from green to black, as the human eye is more sensitive to green than other colours. One drawback is that this is a low-light system and needs some reflected light to function, as the company explains.

Blended scopes require more power but offer the best of both worlds, giving users an intensified view of their surroundings which can be overlaid with an in-picture thermal view for greater fidelity and situational awareness. Qioptiq says it developed these systems to overcome the shortfalls of both systems and to maximise the advantages of each system.

“Our systems are used wherever dismounted users, law enforcement professionals or security services require an enhanced detect, recognise, identify, and engagement capability, 24 hours a day, in poor visibility, in total darkness or through battlefield and natural obscurants,” the company says.

The company’s mounted sights are in use across NATO and other countries. Image: Qioptiq

Qioptiq’s range of soldier based optics varies in scale, from uncooled in-line sights to long-range cooled optics capable of supporting marksman missions using a blend of image intensifiers and in-picture thermal optics. These tools allow operators to seamlessly transition and continue operations from day to night.

The optics focus in the close range below 5km. They are far less powerful than their mounted equivalents but vital nonetheless for ground forces’ intelligence, surveillance and reconnaissance capabilities.

At the top end of the range is the Dragon-S, an uncooled thermal imager capable of detecting a human-sized target at around 3km distance. Qioptiq’s UK sales and marketing manager David Lever explained the inner workings of the scope including a hot-swappable battery system allowing an operator to constantly keep eyes on their targets. The in-line sight is billed by Qioptiq as providing snipers with ’24 hour surveillance and target capability’, all powered by four AA batteries.

On the lower end of the scale sits the company’s Kite image intensified weapons scope, which is available as a stand-alone scope or an inline optic to maintain accuracy during the day. The mounted sight is already in use across NATO and other countries, and in peak conditions allows users to detect a person at up to 2.5km distance. The Maxkite-1 version, meanwhile, is capable of detecting targets at up to 4.5km.

Other soldier systems include helmet-mounted night-vision binoculars and handheld surveillance tools designed to give a marksman’s spotter the same capabilities as they have on their scope. The Phoenix-H handheld thermal imaging unit has a detection range of about 11km for a vehicle and 6km for a human target.

This system can also connect to the company’s Phoenix sight allowing the transfer of marked targets from the handheld spotting unit to the marksman site directly. 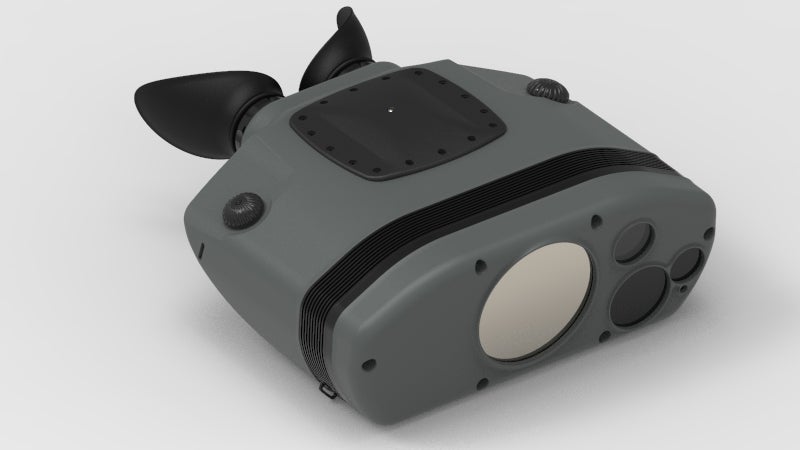 The Phoenix-H handheld thermal imaging unit has a detection range of about 11km for a vehicle and 6km for a human target. Image: Qioptiq

Qioptiq also produces a range mounted night-vision systems which are deployed, for example, on the UK’s AJAX platform of vehicles and US LAV.

The company’s mounted offerings have a significantly wider detection range of well over 10km and are designed for a range of uses. One of them is the PanthIR uncooled continuous zoom camera that Qioptiq touts as suitable for everything from border surveillance to remote weapons stations and anti-drone uses.

Another mounted system is the CheetIR-L which can spot a vehicle at just shy of 40km away and is built for long-range ISR, targeting and naval use, where engagements can be at great distances.

A special focus of both of these optics is a focus on detecting small UAS, which have recently emerged as a new threat to infrastructure and vehicles. Small UAS are hard to spot at the best of times and at night this becomes even more challenging.

Qioptiq’s offering also includes heads up display systems for pilots, which are deployed in a range of aircraft including the Eurofighter Typhoon, the F-22 Raptor and the C-130J Hercules. The company also supplies some of the technology embedded in the $400,000 helmets of F-35 pilots, making a vital contribution to the workings of the world’s most advanced helmet, worn by those who fly the world’s most advanced fighter jet.