The Belgian contract sees the country join the US, UK, Lithuania, Slovenia and Montenegro in pledging its intent to purchase the Joint Light Tactical Vehicle or JLTV, and Lazar says other NATO-allied countries have shown interest in acquiring the vehicle.

Commenting on the appeal of the vehicle, Lazar told Army Technology: “I think four major reasons are the drivers of success for the JLTV in Europe. First of all, it is a proven reliable platform. The JLTV has gone through over 161,000 kilometres of RAMD testing.

“I don’t know of any other vehicle that’s done that type of extensive testing. When we got through that extensive [US Department of Defense] DoD testing, the vehicle was assessed at 16,000 miles between mission hardware failure, which is two times the original US government requirements of 8, a000 miles between hardware mission failure.”

Lazar added that many customers would be ‘hard-pressed’ to find a similar on-the-market vehicle that could achieve the same levels of reliability.

JLTV uses a monocoque capsule design – meaning that the chassis is integral with the body of the vehicle – which has integrated ‘subframes’ to protect the crew capsule. The vehicle also features b-kit armour for blast and ballistic protection.

On the mobility front, Lazar said: “The JLTV has unsurpassed mobility. We have TAK-4i independent suspension on the vehicle – which is double wishbone, fully independent.

“That type of suspension provides over 508 millimetres of wheel travel, and because it’s highly mobile, it can manoeuvre with combat forces, which is unseen with its peers in Europe.”

As of September 2020, Oshkosh had produced over 8,800 JLTVs for the US Department of Defence (DoD) with Lazar adding that the vehicle offered “incredible economies of scale.” along with the promise of interoperability through the vehicles widespread uptake.

Lazar added: “This offers great value for money when you’re making so many trucks. And it’s going to give the Belgian and British servicemen and women what they need – the ability to leverage the maintenance and supply activities of their closest allies and friends. When deployed, it is just incredible what the JLTV has to offer.”

He added: “We don’t know anybody else who is producing – and has not finished producing – over 8,800 trucks to this date; when you do that you can offer value for money.”

So far Oshkosh has received pledges of intent to purchase the JLTV from the US, UK, Lithuania, Slovenia, and Montenegro and, most recently, Belgium. Army Technology understands that the company has also seen interest in the vehicle from several other NATO and allied countries both in Europe and other parts of the world.

Lazar added that the company was ‘very excited’ about the opportunities for JLTV.

Negotiations on the sale of the vehicle to the UK are still ongoing. Lazar told Army Technology that the “that the quantity of the vehicle, [and] the subsequent delivery schedule” is part of the ongoing discussions between the UK Ministry of Defence (MOD) and DoD.

In June, Oshkosh signed a demonstration phase contract with the DoD to investigate the ‘integration’ of UK equipment onto the vehicles as part of the proposed foreign military sales to Britain.

Lazar added that Oshkosh is an ‘integrator’ saying that the company integrates indigenous capabilities onto its vehicle, adding: “So right now we’re looking at ways to integrate bits of your [the UK’s] kit onto our truck to make sure that the end-user gets the vehicle they need and make them successful.”

While the production of foreign military sales vehicles is handled in the US, Lazar added that Oshkosh was ‘always looking for indigenous defence industry partners’ to ensure that the company ‘integrate on the truck exactly what our customer needs to fill their capability gaps’. 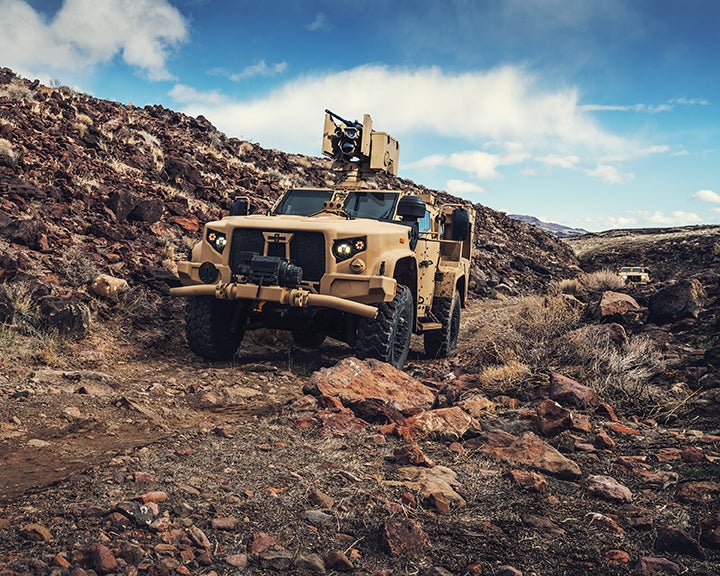 Outside of the realms of protection, mobility, reliability, and interoperability Lazar added that the vehicles payload, electronics and C4ISR systems added to the vehicle’s offering.

Lazar said this C4ISR offering was bolstered by the vehicle featuring a ‘620-amp alternator with a split bus power distribution’ system that could ensure the supply of clean power to C4ISR equipment and EW [Electronic Warfare] capabilities. 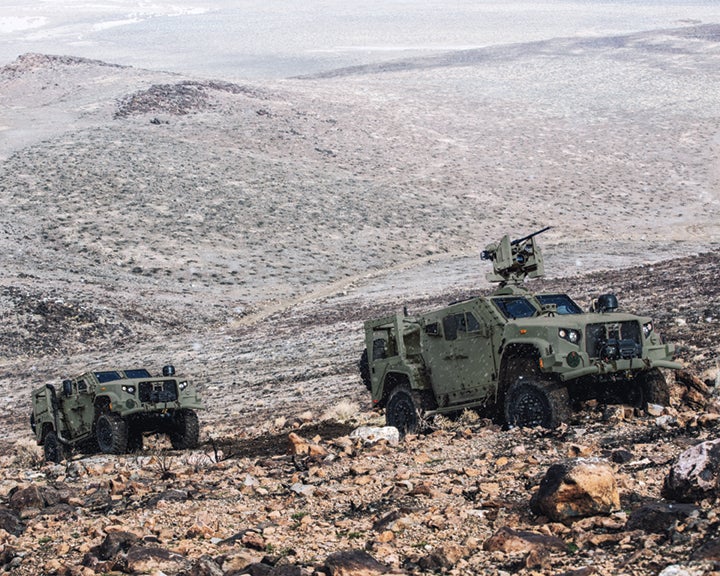 Digging deeper into the vehicles selling points, Lazar touted the vehicle’s ability to ‘manoeuvre with combat forces’ as part of its offering.

Lazar explained: “When you see certain countries that don’t have tracked armoured forces, they have a highly mobile vehicle that can keep up with combat forces and an unlimited ability to integrate new weapon systems and platforms onto the vehicle.”

Lazar said that the vehicle offered countries that don’t have tracked armoured forces “a highly mobile vehicle that can keep up with combat forces and an unlimited ability to integrate new weapon systems and platforms onto the vehicle.”

He added: “Of course, there is a difference between tracked and wheeled vehicles in their capability and mobility. The JLTV can keep up with the combat forces in varied weather conditions. Those 161,000 kilometres, RAMD [Reliability, Availability, Maintainability, Durability] testing was done over multiple terrains and multiple environmental conditions, in snow, all as well as Martian terrain, as well as just regular roads and forests.

“We noticed that there are some countries buying the vehicle that have made strategic decisions not to purchase tanks, but they have purchased 8×8 vehicles as well as JLTV. I think that says a lot about their intent on how they plan to use it.”

So far, the US Army has over 100 different kits for the JLTV, and the company has also integrated anti-tank capabilities onto the vehicle for some of its customers.

Lazar added: “The versatility of the vehicle to conquer multiple terrains is just unbelievable. We’ve held dynamic demonstrations in several different countries, including several of them in the UK. We’ve held them [as you say] on the continent from places as far north as the Scandinavian countries to the Baltic countries.

“Of course, we’ve demonstrated it in Western Europe, as well as the Balkans. So, the vehicle performs very well, and we are always very excited when we’re allowed by our allied and coalition partners to do these dynamic demonstrations on their test sites because it shows the vehicle’s capabilities.”