Key to the concept is the combination of a modular armoured vertical launch system – that could in future be carried on an 8×8 armoured vehicle like the British Army’s newly acquired Boxer – and integration with a Battle Management Command, Control, Communications, Computers and Intelligence (BMC4I) solution that would allow the handoff of targets from forwarding reconnaissance vehicles, helicopters or potentially fighter aircraft like the F-35.

Designed for line-of-sight and beyond-line-of-sight engagements, Dalzell explained how the anti-armour concept could sit within the formations like the British Army’s armoured infantry or Strike brigades bolstering their firepower and engaging adversary armour from a safe distance.

Another aspect of the concept is that it is designed to support future operations that could see a numerically smaller British force dispersed across a larger location. This is key to the concept’s network aspect, as the launch system will not always be the vehicle to find a potential target.

Dalzell said: “What we’ve been doing is future-gazing to a certain extent, to understand what the future anti-armour needs of our army customers might be. In the UK we are looking to the British Army but, we are aware that there are customers in other countries who may have similar requirements.

“We are looking very much beyond where we are at the moment and understand where the needs might be within the next ten years onwards and trying to answer some of these particular challenges that are out there, and I think some of them have been explained already to a certain degree within the context of the IAV conference.”

Examples of the challenges Dalzell mentions are concepts like multi-domain operations – with forces working together across air, land, and sea. More importantly, for this concept, being able to shoot without being seen and the need to link ‘shooters’ to counter adversaries might bring more vehicles to a battlefield.

Explaining the requirements of the concept, Dalzell said: “One is the ability to carry a very large magazine with the ability to potentially salvo-fire that magazine very quickly and concentrate that firepower on a particular area, or to disperse it across the battlespace as required.

“Key to that is the ability to conduct third-party engagement or beyond the visual line of sight. That means there are many cases in which the launch vehicle would not be the vehicle which physically identifies the target and designates it.

Expanding on this, Dalzell added that the concept draws on influence from the maritime domain, where surface combatants carry large magazines of missiles in vertical launch systems (VLS). The warships can draw their targets from third-party systems and vertically launched missiles tend to pack more firepower than their horizontally launched counterparts.

This configuration also removes personnel’s need to load a launcher from a magazine inside the vehicle to the roof-mounted launch platform. The whole system can be held in a ‘ready-to-fire’ configuration, saving time and keeping personnel under armour. 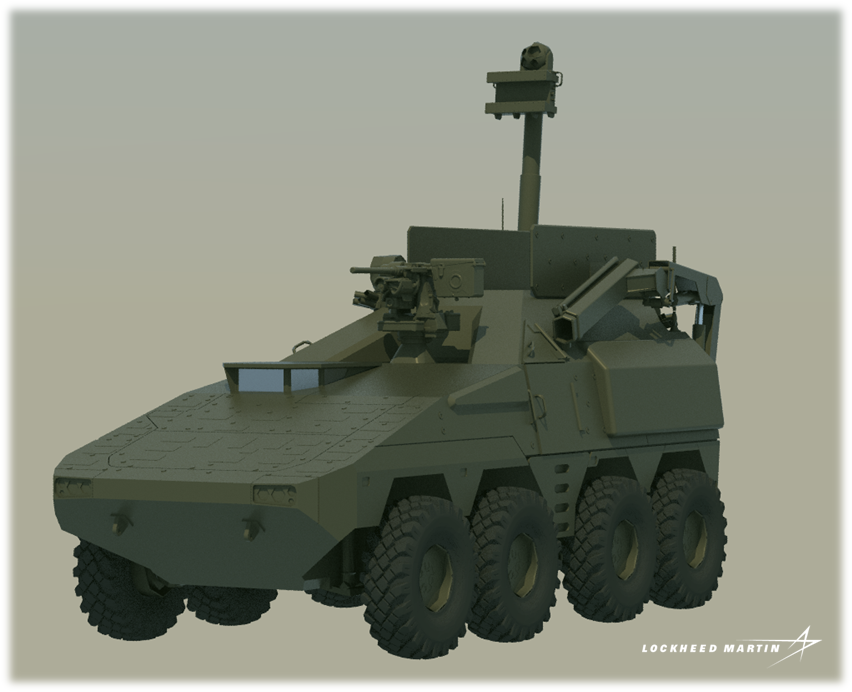 The concept launch system is currently shown on an 8×8 with Boxer being the example vehicle. Dalzell explained how the modular factor was another key point on the concept, meaning the launch system could be mounted on light vehicles or in future Uncrewed Ground Vehicles (UGVs) if desired. To this end, Lockheed sees the concept launcher being fully compliant with the Generic Vehicle Architecture (GVA).

The concept launcher is designed with a mast-mounted sensor payload to allow the system to positively identify potential targets at ranges of beyond 5km from behind cover. The sensor suite also includes a radar system designed to detect moving targets and ranges of up to 20km.

The vertical launch system allows for 360-degree engagement of targets in complex terrains such as valleys or urban city streets. Lockheed sees the potential system as carrying 16 50 kg class missiles – the weight of Hellfire or Brimstone.

Connectivity would come via systems such as the British Army’s future MORPHEUS system, or NATO Link-16 with the system also utilising Lockheed’s SkyKeeper BMC4I system that received high-praise from the British Army at Army Warfighting Experiment 2021.

SkyKeeper would provide the vehicle commander with access to a ‘sensor-shooter’ network covering both air and land. However, Lockheed Martin makes clear that the means of sharing information and target would not be reliant on any specific communications ‘bearers’, and that SkyKeeper can integrate a very wide range of land and joint CIS networks.

Dalzell said: “The modular launch system is going to be compatible with a whole range of vehicles from light to heavy. The principle behind it is that we’re not wedding ourselves 100 per cent to one particular vehicle. That being said, the Boxer platform does present a lot of particular advantages.

“There’s a lot of volume available for VLS integration in the mission module, and the potential ability to build and qualify that module without having to tie up a lot of the fleet that the land forces are trying to bring into service at the same time. You’ve got this almost parallel capability development opportunity.”

In November 2019, the British Army announced its £2.3bn order of 528 Boxer vehicles covering four variants; a troop-carrier, ambulance, command vehicle and specialist carrier. Boxer is set to be a crucial part of the UK’s planned Strike Brigades alongside the AJAX family armoured vehicles. The AJAX reconnaissance variant features a Lockheed Martin-designed and manufactured digital state-of-the-art turret.

Dalzell added: “One of the points is that a relatively smaller, numerically inferior force which is going to have to disperse and coalesce on a future battlefield in order to survive; it is going to have a need to bring firepower to bear very quickly and in large volumes, at a particular point in the battlefield.

“That’s likely to mean that these systems may not be directly at the point of need, and therefore need to be able to project their firepower across that battlespace. They might need to do that very quickly and with large volume to prevent our dispersed forces from being overwhelmed. We very much expect to see that as big force multiplier, particularly for medium-weight formations like Strike brigades.”

Lockheed Martin is also currently working on the Warrior Capability Sustainment Programme (WCSP), which plans to deliver a sorely needed upgrade to the UK’s fleet of Warrior Infantry Fighting Vehicles brought into service in the 1980s. The new capability is a critical element of the British Army’s modernisation programme and is set to bring significant prosperity benefits to the UK. During its manufacture phase, 2,000 British jobs will be created and sustained and £1bn will be injected into the economy.

The Warrior programme combined with AJAX has driven investment in Lockheed Martin UK facilities, particularly at its Turret Centre of Excellence at Ampthill. The company sees the Warrior CSP programme as key to ensuring the UK retains this sovereign capability and the specialist skills base needed for future turret development and export opportunities.