The company said both systems were well received at AWE 20, earning the attention of the most senior levels of British Army as it looks to connect all of its systems into a ‘digital backbone’ moving forward. Lockheed Martin also showcased Indago, an in-production quadcopter uncrewed aerial vehicle (UAV).

At the event, Lockheed Martin saw interest from senior-level Ministry of Defence (MOD) officials in SkyKeeper and THEIA. Lockheed Martin was selected from among the suppliers on show to brief senior decision-makers within the department on its THEIA and SkyKeeper capabilities.

Lockheed Martin’s business development manager for SkyKeeper (UK) and Deep Fires Ben Cottenden told Army Technology: “In terms of digitalisation, the digital backbone, they [senior officials] were looking at how SkyKeeper could be part of that and facilitate some of that.

“That was really good and positive. It looks as though there’s going to be future opportunities for us to demonstrate and show the capability to the army and to wider audiences off the back of that.”

This was echoed by Lockheed Martin UK’s programme manager for THEIA Becci Broome who added: “It was really reassuring around THEIA, Indago and the whole complementary suite of services all the way through to SkyKeeper.” With senior officials telling Lockheed Martin that the tools were ‘exactly what we [the army] need’. 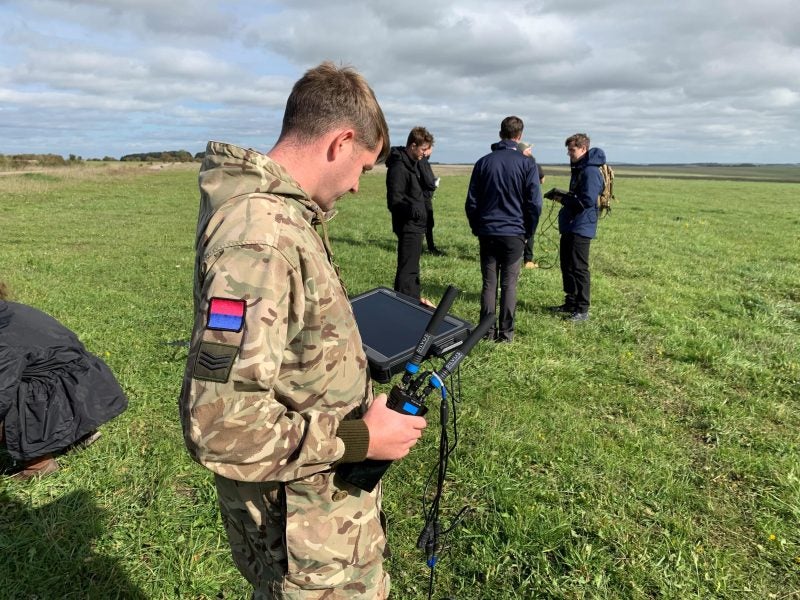 Named after the Greek Goddess of sight, rather than being an acronym, THEIA brings together the feeds from several UAVs in real time, allowing for threat detection and the creation of a common operating picture that can be fed back from personnel on the ground up to the Brigade level.

Broome explained: “Essentially what it’s bringing together is ISTAR, which is intelligence, surveillance, target acquisition, and reconnaissance, capability. So, it is for improving the

situational awareness across the battlespace. We use UAVs for the imagery to stream; we detect objects in the environment of interest. Objects of interest will vary depending on the environment; on maritime operation, we can detect, ships, boats and wakes. Obviously for AWE, it was land, so we detected people and different types of vehicles.

“What it actually does is then augment the battlespace. Working with comms bearers, the battlespace becomes connected, meaning that everyone at the edge – those at the forward operating base, troops with the UAV in hand have visuals, and those all the way back at the Brigade-level and Battle Group Headquarters, has, in real-time, the same level of information to expedite decision making. It also routes all the situational awareness data back into the hands of the troops. Rather than having just one view of one UAV. We’ve got a fleet view of UAV feeds, with all of that surveillance in place at the same time.”

THEIA has been developed in close partnership with the British Army. Broome explained: “They helped us understand the user interaction and needs in an operational environment, by guiding the style of our User Interface.”

Listening to user feedback, multiple services have evolved, some developed in-house by Lockheed Martin, others include third-party software integrated with ease thanks to the Open Architecture design of THEIA. The system allows for the remote command and control of multiple UAVs from a single device and uses machine learning for automated threat detection.

Whereas currently personnel can deploy a UAV at a squad level to get eyes on a threat, THEIA allows it to be viewed from multiple angles, with several systems allowing personnel to get a better understanding of how to combat a threat.

While at AWE 20, the imagery was sourced from the Indago UAV on-site, imagery from almost any source can be pulled into the system. In theory, on operations, THEIA could pull together imagery from several UAVs, CCTV cameras and the sights of an armoured vehicle such as Warrior, AJAX or Challenger.

Commenting on close collaboration with the army on THEIA’s development, Broome added: “There’s no point industry developing a piece of capability that then in the hands of really congested, distracted, environment, it just doesn’t work for them. So, the user interface they [the British Army] helped design in the first instance was a real turning point in our approach.

“During the event itself, we offered them [personnel] training, so they had it in their hands, and generally, the feedback was really positive. It’s a development prototype; it’s important to say that, we listen to the feedback and we’re constantly changing through our agile process to take on board the commentary of what works well and what needs enhancement.”

THEIA itself is not siloed from SkyKeeper but rather can feed it into the broader battlespace management solution. Broome explained that the multiple camera feeds THEIA can pull in could be vital for validating what commanders see in SkyKeeper. 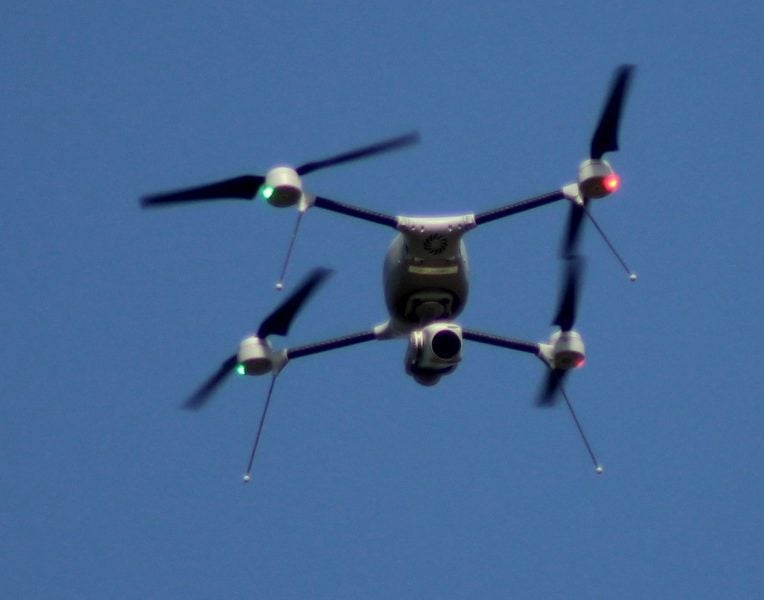 SkyKeeper has its roots in two in-service capabilities developed for the British Army including the Land Environment Air Picture Provision or LEAPP which was developed by Lockheed Martin and the Automated Sense and Warn (AS&W) system fielded in Afghanistan.

Cottenden said: “The heritage of SkyKeeper comes from both of those products. It’s a genuine open architecture system – it’s not a black-box system, which means that it’s easy to integrate sensors and effectors. We can do that in a matter of weeks.”

While Lockheed Martin is a global company, SkyKeeper is built entirely using UK intellectual property, something Cottenden said the company saw as critical to the systems future success.

Explaining how the system was utilised at AWE 20, Cottenden explained: “What we were doing on AWE was providing situational awareness at the Brigade, and the Battle Group level; the system is also scalable so it can go all the way down to company and platoon level. Then effectively everyone gets to see the same picture, you just aggregate it or scale it depending on the Head Quarter situation. You can geo-filter depending on the location and the size of the formation.

“What we were doing was integrating with THEIA to take their feed, and we took that in at a Battle Group level and passed up to the Brigade level. Then at the Brigade Level, we integrated with a counter-UAS effector providing a10km bubble, we were then able to send that picture down to the Battle Group level. So, we’re sending live video feed in both directions, as well as providing a joint air and land common operating picture.” 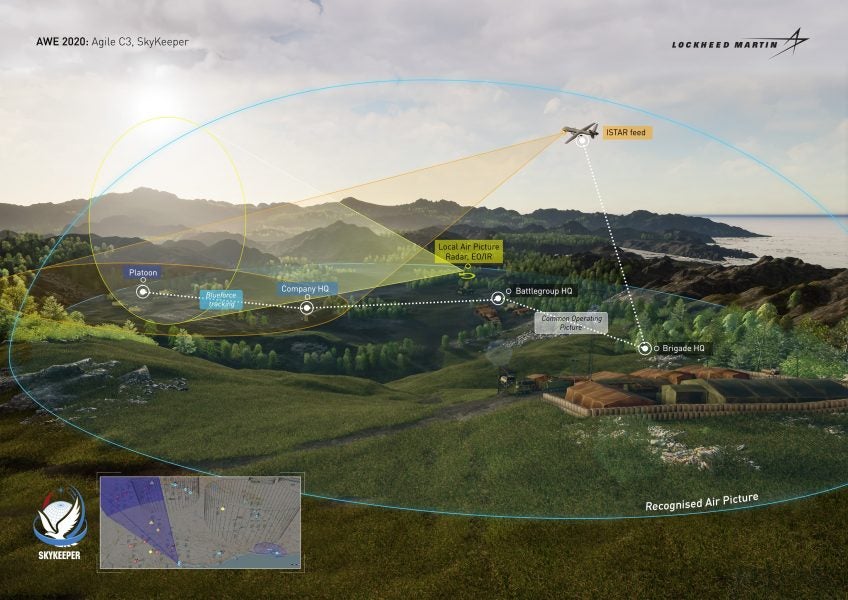 Using SkyKeeper, commanders at every level can get access to the common operating picture allowing them to see the location of friendly forces. The system is built around the Link 16 tactical data link used by NATO, meaning in theory the battlefield picture could also be shared across a coalition force.

AWE also allowed Lockheed Martin to explore the wider scope of what SkyKeeper can do, with Army experts in Deep Fires, counter-UAS, and Ground-Based Air Defence (GBAD) using the event to explore its capabilities.

This utility across the British Army, and common operating picture the company added fitted back into the idea of the digital backbone currently being explored by the UK Ministry of Defence (MOD).

Cottenden said: “If everyone’s got the same picture it makes command and control, and situational awareness for the people fighting so much better and so much quicker.

“Whereas in the past, you might have had to check on the radio to get an understanding of where people were, or who that was over the hill, you can actually now see it on your screen. And a lot of it goes back to really supporting the digital backbone that the UK is trying to implement. These products will sit on that digital backbone, they will support it, they will enhance it, and that’s really what we’re trying to achieve.”