Advances in missile technology have been made in recent months, sparking interest, concern and scepticism in equal measure. Both Russia and China have announced the development of new missiles after years of research and, in some cases, bragging.

For the past decade or so, Russian President Vladimir Putin has talked of developing missiles that were impossible to defend against. Speaking earlier this year to a domestic audience, but with far-reaching international overtones, he said the country had developed a raft of new strategic weapons, six to be precise.

They included a so far unnamed nuclear cruise missile and the Kinzhal missile, a hypersonic air-launched aero-ballistic missile with a range of up to 2000km and able to carry conventional and nuclear warheads. Adding the missile was undergoing its final tests, Putin said: “It is the only one of its kind in the world. Its tests have been successfully completed, and, moreover, on 1st December of last year, these systems began their trial service at the airfields of the Southern Military District.”

He added the missile, which flies at Mach 10 (ten times the speed of sound) could be manoeuvred at any stage of its flight, making it more difficult for current missile defence systems to intercept.

A short while later China said it had developed the Dongfeng-41 (DF-41) missile system. Announcing the news in the state-run People Daily, the country said the hypersonic nuclear missile, which is believed to have technology that will enable it to evade air defences, could hit anywhere in the world with the range of the intercontinental ballistic missile (ICBM) being larger than any other known missile today. It is believed the system has completed 10 successful test flights so far.

Although some commentators have questioned the reliability of the claims made, by Russia at least, there has been concern for some time in Washington that the US was falling behind with missile technology. Gen. Paul Selva, vice-chairman of the joint chiefs of staff, told the Defense Writers’ Group the country had lost its technical advantage in hypersonic missile technology but, he said, it hadn’t lost the “hypersonics fight”.

“Lockheed Martin has been asked to design a cruise missile that flies inside the atmosphere at hypersonic speed.”

Months later, in June, Lockheed Martin announced it had secured a $928m contract with the US Air Force to develop a hypersonic cruise missile. The Hypersonic Conventional Strike Weapon (HCSW) will be an air-launched missile but the company revealed little more about its technology. John Snyder, vice president of Air Force Strategic Programmes said: “Our goal is rapid development and fielding of the HCSW system, and this contract is the first step in achieving that goal. Design, development, production, integration and test experts from across Lockheed Martin will partner with the Air Force to achieve early operational capability and deliver the system to our warfighters.”

First Director of the Israel Missile Defence Organization in the Israel Ministry of Defence Uzi Rubin said: “Lockheed Martin has been asked to design a cruise missile that flies inside the atmosphere at hypersonic speed. This is a tremendous challenge.”

“Going from point A to B it [the missile Lockheed has been tasked to develop] has to have an engine that pushes it through the atmosphere all the time. So a hypersonic cruise missile has to have an engine that can power to five times the speed of sound. This type of engine is a tremendous challenge. The only kind of engine that might work in this type of system is a hypersonic ramjet. It’s very complicated technology; it’s not simple and not developed yet.” says Rubin.

How advanced is the technology?

To date, he says, the US has conducted tests on this type of missile system but to his knowledge none have been successful, flying for just a few seconds. “This is a big challenge and a surprising one that they feel confident enough to commit $1bn, which is a lot of money when you’re talking about R&D. I suspect they are more advanced than what has been published. It is a military programme so who knows what’s going on. It’s their right not to disclose.” 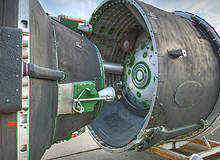 However, Rubin cautions against the suggestion this news was a response to the advances that have seemingly been made by the Russians and Chinese. “Putin, in his speech, also talked about a revolutionary cruise missile but it was a nuclear one which means it doesn’t go faster than the speed of sound but has a very long range. With that range it could technically go from Russia through the South Pole and to the US’s backyard. I question the reason behind this though.”

The eternal seesaw between defence and offence

Instead, Rubin believes the move by the US is more to do with advances in missile defence technology. Russia, he said, has been working on their new systems because US defences have improved.

“Missiles and missile defences are very contentious issues. They are political and emotional. In Russia and China, for example, you don’t hear any good word about missile defence but they are working on that too. If the US wants to keep the capability and standard of weapons to penetrate future Russian and Chinese defence systems they have to go hypersonic. This is simply the eternal seesaw between offence and defence that has been going on since the days of sticks and stones.”

Whilst the news from the US Air Force and Lockheed Martin suggest they are closer than we knew to finally developing the type of cruise missile they announced, Rubin says he believes they’re still a way off.

“From the published information I saw, they are far from solving the problem but perhaps they have achieved a technical breakthrough,” he says. The problem he says is to develop an engine that can fly at hypersonic speed within the earth’s atmosphere, unlike ICBMs which use their trajectory as a power source. But, he says, they will do it. “Anything that does not contradict the laws of physics can be done. Whatever is defined by those laws, and hypersonic fight is, can be achieved if you invest enough time and money.”