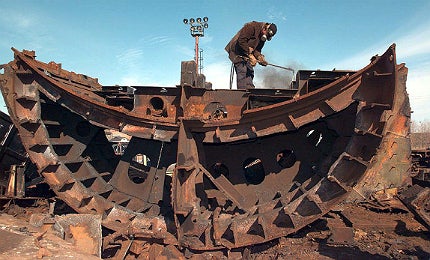 In the wake of the Soviet Union’s collapse in 1991, Senators Sam Nunn and Richard Lugar sponsored legislation which eventually to lead to what is officially termed the Co-operative Threat Reduction (CTR) programme – and unofficially, ‘Nunn-Lugar’. In the two decades since, it has been credited with many successes, including the dismantling of more than 7,500 nuclear war-heads, eliminating major stockpiles of nuclear, biological and chemical weapons, and making the former Soviet republics of Ukraine, Belarus and Kazakhstan nuclear-free.

However, Moscow’s military have long argued that this US-financed initiative affords Washington far too clear an insight into the country’s defence technologies and weapons bases, while others in the Kremlin see it as increasingly incompatible with the current economic realities of the new Russia.

Although the Obama administration had been looking for it to continue, Russia’s Foreign Ministry had made no secret of its reluctance to carry on with the arrangement along existing terms, after it expires next spring. As deputy foreign minister Sergey Ryabkov commented at the time, October’s announcement should not have come as news to the US.

"Russia’s Foreign Ministry had made no secret of its reluctance to carry on with the arrangement along existing terms."

"Money and missiles – that’s the two big issues Russia has with Washington right now," says defence blogger, Newton Hunter. "Moscow’s become more and more unhappy with the way it sees American dollars dictating [Russian] national policy. It’s not the out-and-out ‘no’ to arms reduction that some people have made it sound – it’s more a ‘no’ to Nunn-Lugar, or at least Nunn-Lugar as is. They just want the terms of the game to be a bit more balanced, and reflect the way things have changed [during] the last 20 years."

Hunter suggests that agreeing a more Russian-financed and inspected approach would undoubtedly allow cooperation over non-proliferation to be maintained, something both Presidents Putin and Obama clearly back, but there remains one seemingly intractable obstacle – America’s proposed missile shield.

"Missile defence is the major sticking block. The Russians are very wary of the whole idea of an anti-missile system based on their borders, despite all the assurances that it’s not going to be used against them – and they have got a point. Obama promised Medvedev when he was Russia’s president that he’d be ‘flexible’ about it, but Moscow doesn’t feel there’s been much evidence of that so far."

Russia may have sighed in collective relief at the Romney defeat – he did, after all, famously describe the country as "America’s number one geopolitical foe" – but while with Obama comes an element of ‘the devil you know’, as his relationship with Putin is not an easy one and there are other challenges ahead. Arguably the most significant of these lie in the familiar cauldron of the Middle East.

"With Obama comes an element of ‘the devil you know’, as his relationship with Putin is not an easy one."

"The Obama administration is going to face increasing pressure to do something about Iran," Hunter says. "People worried that a Romney victory might have given the green light to Israel to attack Iran’s nuclear programme, but it’s looking like we could see Obama having to agree to that anyway – maybe next year – always assuming he doesn’t send in the bombers himself.

"And then there’s Syria. How long can the US avoid doing something to help support the uprising? I don’t believe that’ll mean actual American boots on the ground, but you bet Putin will be watching Obama very carefully on that one."

He thinks Moscow’s support for the regimes in Tehran and Damascus may be less about safeguarding Russian interests and influence in the region – or even arms contracts – than the desire to avoid any kind of US-mandated regime change. "Putin is not about to let Washington set the global agenda, and with his permanent seat on the Security Council, he’s obviously got the leverage."

Moscow is equally unhappy about perceived US interference in domestic matters, with Aleksei Pushkov, chairman of the Duma Internal Affairs Committee, commenting recently that: "Washington should pay less attention to Russia’s internal issues and should make more efforts on bringing the two states together."

The rhetoric plays to a familiar populist beat within Russia. As Sergey Mikhailovich Rogov, director of the Institute of USA and Canada of the Russian Academy of Sciences (ISKRAN), has observed, US strategy has always been to find compromises over military issues, develop economic ties – and then heavily criticise Russian internal and external policy. It seems fair comment.

With the single biggest military issue of the moment mired beyond compromise, moves to finally lift America’s Cold War trade restrictions on Russia are linked – much to Moscow’s chagrin – with human-rights legislation spawned by the treatment and eventual death-in-custody of lawyer Sergey Magnitsky.

Obama was the President behind the famous ‘reset’ in Russian relations, and many are suggesting that now might be the moment to reset the reset. If so, Hunter muses, unlike the last time, it is imperative that America finds the right word – in Russian – and spells it in Cyrillic. Moscow’s renewed sense of itself on the world stage demands nothing less.