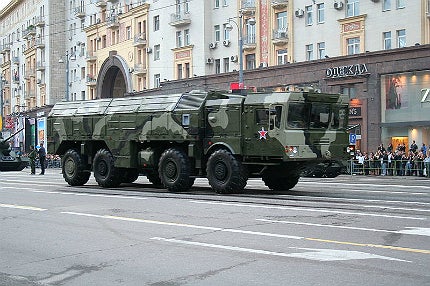 The Spanish Ministry of Defence (MoD) will receive €877.33m of additional funding in the 2013 budget from the government, to finance several long-standing major weapon and equipment programmes, the country’s Deputy Prime Minister Soraya Saenz de Santamaria has revealed.

Santamaria was quoted by defense-aerospace as saying that extra funding will be used to fulfil obligations incurred by the MoD in the past several years, instead of covering the national deficit.

Specifically, the funding will support 15 major weapons acquisition programmes, including the Eurofighter Typhoon, which will take up €337.5m, while Tiger attack helicopter and Airbus A400M aircraft programmes will receive €88.26m and €46.6m respectively.

Issued by the Public Works and Government Services Canada following the release of a letter of interest and one-to-one meetings with industry representatives in January, the RFP seeks acquisition of a new fleet of up to 1,500 medium-sized trucks and associated logistics solutions.

Specifically, the SMP vehicle requirement covers procurement of five vehicle variants and associated equipment, as well as in-service support throughout their service life.

The US Army has installed a Samsung Galaxy Note II smartphone into the Nett Warrior (NW) system in an effort to enhance situational awareness in the battlefield.

Carried out by the programme Executive Office-Soldier (PEO-S) as part of the army’s focus on the tactical network modernisation, the installation as the chest-mounted end-user device is designed to offer enhanced mission planning, monitoring, communication and situational awareness to the soldier during combat operations.

Serving as NW’s centrepiece, the device provides dismounted personnel with locations of fellow soldiers, in addition to enabling placement of locational digital "chem light" markers, and relay of text messages and other information, to both lower echelons and commanders over encrypted tactical radios.

CAE Military-Europe vice-president and business leader Ian Bell said the latest GESI version offers several enhancements and improvements, enabling the army to train commanders and staff in a range of actual missions that are likely to be encountered in the battlefield.

The UK Ministry of Defence (MoD) has published a white paper that highlights the government’s investment plans to maintain and expand the country’s reserve forces in the next decade.

Titled ‘Reserves in the Future Force 2020’, the white paper represents a significant step forward in the MoD’s plans to establish a new, fully integrated reserve force, which will be adequately equipped, funded and trained for whenever they are needed for operations.

The £1.8bn funding specifically aims to grow the Territorial Army, which will be renamed the Army Reserve, to around 35,000 across all three armed services, in addition to offering vital support and incentives to reservists, their families and employers.

The Indian Ministry of Defence (MoD) is considering withdrawal of the domestically developed Prithvi surface-to-surface missile in an effort to boost its precision strike capabilities, Defence Research and Development Organisation (DRDO) chief Avinash Chander has announced.

Chander was quoted by Press Trust Of India as saying that the 150km-range Prithvi missile will be replaced with the newly manufactured quick reaction Prahar missile, which features greater accuracy.

Following withdrawal, the tactical variants of Prithvi missiles are scheduled to be upgraded for long ranges uses, Chander added.

Russian MoD to equip missile brigades with Iskander systems by 2018

The Russian Ministry of Defence (MoD) is planning to equip all ground forces’ missile brigades with Iskander-M ballistic missile systems by 2018, the country’s defence minister Sergei Shoigu has announced.

Shoigu was quoted by RIA Novosti as saying that an advanced Iskander-M missile complex has already been delivered to a missile brigade in southern Russia’s Astrakhan Region.

The complex was handed over in a complete set, as opposed to the previous practices of delivering ‘piecemeal’, Shoigu added.

North Korea is reportedly upgrading its ageing multiple rocket launcher stations along the region bordering with South Korea, according to an unnamed member of the South Korean Government.

The official was quoted by Yonhap News Agency as saying the North Korean military’s existing 107mm-calibre multiple rocket launchers are being replaced with the enhanced 240mm guns.

"We are detecting signs that the North is deploying the improved 240mm-caliber multiple rocket launchers, and the signs are showing up at some western and eastern frontline military units," the official added.