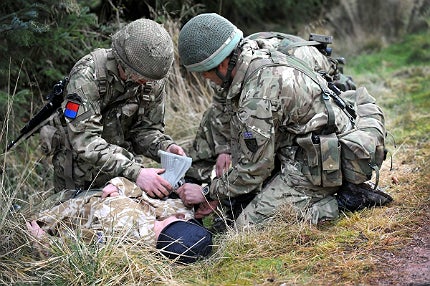 Horrifying wounds suffered by soldiers in recent wars characterised by insurgent fighting and IED blast injury injuries have led to a revolution in trauma care, so much so that in 2008, the Healthcare Commission found trauma care standards "exemplary" and suggested the National Health Service (NHS) could learn from them.

This shows a radical improvement over conditions a decade earlier, when a 2008 Ministry of Defence (MOD) report found that practices in the Defence Military Services fell well below that of the NHS.

Deployed army surgeons have world-class facilities and the latest in best practice at their fingertips, and field hospitals proudly claim that everyone entering with a heartbeat will leave with one. But military medics and those working for humanitarian non-governmental aid organisations (NGOs) in war and natural disaster zones can find the achievable quality of critical care set back decades.

At this year’s DSEI expo in London, Col. Peter Mahoney, defence professor of anaesthesia and critical care at the Royal Centre for Defence Medicine, lifted the lid on the contrast between the military expectations of casualty care, the humanitarian reality and the friction between the two.

In the military environment, injury expectations are based around blasts and projectiles, which shape training and rescue procedures. When a soldier receives a traumatic injury, a UK medevac helicopter is summoned with a qualified doctor on board and equipped with a workstation, condition monitor and medical equipment; the culmination of several supply chains.

An understanding of the types of injuries inflicted by specific weapon systems means they are properly prepared and the soldier can be brought back to a sanitary field hospital with a supply of clean water and a constant electricity supply.

Patients can be run through a CT scanner to recognise the type of injury and up to three of four surgical teams may work on a single patient, depending on the set of injuries. Advanced logistics means a full set of specific kit will be available. Once stabilised, a patient can be put in a transport aircraft and airlifted to a UK hospital, often with the luxury of one patient per aircraft.

Before even seeing a patient, teams will train for every eventuality in a simulated field hospital, often using Amputees in Action actors and prosthetic make-up to add "right-looking and smelling" simulated casualties to the scenarios. Medical teams are taught to "think system" to see procedures through from end to end.

"An understanding of the types of injuries inflicted by specific weapon systems means they are properly prepared."

For medics providing humanitarian medical care, however, the situation is horrifyingly reversed. In his speech, Mahoney gave the example of critical care unit during NATO‘s action during the Kosovo conflict, treating civilians, many of them children, injured by anti-personnel mines.

The power went out once every 24 hours with no back-up to operate the ventilator, meaning anyone who needed it would not survive. With no sanitary waste disposal methods available, everything was thrown out of the window, including human waste. According to Mahoney, Royal Engineers may have saved as many lives as surgeons by restoring basic utilities and infrastructure.

Post-war medical facilities not only have to deal with missing infrastructure and supplies, but also a lack of skilled health workers as many may have been killed or fled the conflict. In Sierra Leone, Mahoney witnessed health workers boiling syringes and needles in a HIV prevalent area. The Red Cross team working in the hospital were limited in what they could do as foreigners were subject to a 6pm curfew.

At Dili hospital in Eastern Timor, a year after the main fighting between the Timorese andIndonesians, many skilled personnel had died or escaped. Resources were so limited, operating theatre ventilation was provided by manually squeezing a bag and no post-operative ventilation could be supplied.

When ongoing conflict overspills into a natural disaster, the situation for humanitarian care worsens radically. Prior to the 2004 tsunami in Sri Lanka, the Tamil Tigers already controlled the north of the country, making supply lines ineffectual, and afterwards the humanitarian medical teams needed permission from them to even enter the area.

With no skilled personnel available to administer anaesthesia, local volunteers, including a priest, were trained how to use basic anaesthetic from a bottle or syringe to manage patients with survivable injuries. Empty medicine bottles had to be washed out and re-used, while animals roamed freely through the hospital.

The radical difference between the sophisticated resources available to military medical personnel in a conflict and restricted conditions faced on humanitarian missions can lead to a clash of philosophies that ultimately means fewer lives are saved. Mahoney cites a paper by Robin Coupland, senior surgeon of the International Committee of the Red Cross, which reports his experiences in Kabul in Afghanistan in 1992.

"Medical teams are taught to "think system" to see procedures through from end to end."

Coupland describes getting multiple casualties coming in with a Western mindset, operating on the most seriously injured first as they would in the NHS or military. But for injuries that require significant aftercare, such as gunshot wounds to the stomach, patients are at a high risk of dying within three days from a lack of post-operative care, fluids and supervision.

The situation caused Coupland to change his mindset and recommend an alternate medical viewpoint in humanitarian missions. He suggested the most lightly wounded were treated first with the simplest process available, avoiding complex surgery unless necessary. If those with most significant injuries were still alive after two or three days, only then would they be operated on.

These two medical worlds are radically different, but where they meet the multiple medical systems can clash to the detriment of the patient. An army doctor, who’s used to having the best in care at his disposal arrives to provide humanitarian care to civilians in a war zone, needs to adjust rapidly to the change in circumstances. Each situation will need to be treated individually – what medical care is possible will depend on the particular location and situation.

"Each situation will need to be treated individually – what medical care is possible will depend on the particular location and situation."

A number of organisations dedicated to bringing medical care to where it is most needed have sought to address this conflict, to ensure they meet their aims of ensuring as many individuals as possible survive. The British Red Cross chairs a quarterly forum to improve and strengthen communications between NGOs, the British armed forces and relevant government departments, addressing policy, technical and operational issues around civil-military relations in humanitarian response. Participants include representatives from the International Red Cross and Red Crescent Movement, NGOs, the British armed forces, Ministry of Defence (MOD), Department for International Development (DFID), Foreign & Commonwealth Office (FCO) and a number of independent practitioners.

With no military affiliations, Medecins Sans Frontiers (MSF) is an international medical humanitarian organisation created by doctors and journalists in 1971 to provide medical care to people caught in war zones. While much of their work is treating injuries directly caused in conflicts, they also supply care for people cut off from medical care or denied the ability to seek treatment they need by fighting. MSF also recognises that outside military intervention is sometimes the best way to support their efforts in relieving the suffering caused by warfare — in 1994 the organisation took the unprecedented step of calling for an international military response to the Rwandan genocide.

Wherever there is warfare there will be civilian casualties and brave professional medics – many of them military personnel themselves – prepared to put themselves in the line of fire to provide the very best standards of treatment that circumstances allow.

They must adopt a systematic approach and recognise that procedures that promise the best outcome in an advanced field hospital may need to be radically rethought to ensure the best outcome during humanitarian missions.

However tight budgets are, defence departments are always willing to invest in body armour and helmets, and the US military is the world’s biggest market for protective gear.

Medical teams refer to the critical period after a traumatic injury, during which it is most likely that rapid medical treatment will prevent death, as the "golden hour".