From Porton Down to the Caribbean, armed forces and the defence industrial base have stepped in to support the response to the coronavirus pandemic. Ground forces have set up field hospitals, air forces are transporting essential supplies, navies are providing humanitarian assistance, and defence contractors have rapidly adapted their production lines to manufacture ventilators and personal protective equipment (PPE).

Armed forces around the world respond to Covid-19

In the UK, a mass mobilisation of the armed forces has been a core component of the government’s response to the pandemic. Reservists have been called into service, soldiers retrained to drive oxygen tankers, the Queen’s Ghurka regiment has built a series of Nightingale hospitals, and scientists at the Defence Science and Technology (Dstl) have provided laboratory capability to Public Health England.

The military response has been similar elsewhere. The US has also deploying its military power to support resilience operations, with US service personnel setting up field hospitals and providing scientific capability in the search for a vaccine or treatment for Covid-19.

Speaking at a 10 Downing Street press briefing in April, the UK’s most senior military official, Chief of Defence Staff General Sir Nick Carter, said: “It’s a tried and tested system that’s been used many times in the past, whether for delivering military aid to the civil authorities, through foot and mouth or flooding or for wildfires. It’s frequently exercised and there are very close relationships which give great confidence between everyone working on those teams at the lower level.

“It’s important because it’s at this delegated level that this works, because it makes them [the government] much more responsive, and much more flexible to respond to local demand whether it’s for ambulance drivers or for testing or whatever else. With decentralisation being so much the key to the way some of this is done, the Defence Secretary delegated authority to this level early in the crisis, which has proved to be extraordinarily successful.”

Carter added: “I would say that in all my more than 40 years of service this is the single greatest logistic challenge that I’ve come across.” Considering that this period covers the Falkland’s War, Gulf War, Iraq War, and Afghanistan, this statement certainly emphasises the magnitude of the challenge presented by the pandemic.

France has deployed its military to similar effect, with President Emmanuel Macron using the armed forces under Opération Résilience to transport supplies around the country and to France’s overseas territories.

At sea, the UK, France and the Netherlands have created a joint military cell to coordinate support activities between three ships deployed to the Caribbean. The UK Ministry of Defence (MOD) said in a release: “France, the Netherlands and the United Kingdom have decided to join efforts in dealing with the Covid-19 crisis currently affecting their overseas territories. In order to help relieve local populations, they decided to bring a coordinated military answer in support of civilian crisis management tools.”

One of the most visible aspects of naval response was the deployment of US hospital ships USNS Mercy and USNS Comfort to New York and Los Angeles. The 1,000-bed ships supported the public health capabilities of both cities and helped alleviate the strain on existing hospitals.

International cooperation has proved a cornerstone of the response, with organisations such as NATO facilitating the transport of supplies between its 30 member states through the Euro-Atlantic Disaster Response Coordination Centre and the Strategic Airlift Capability and Strategic Airlift International Solution.

These have been used to transport PPE, medical supplies to where they were needed, and patients from the worst affected countries to those with available healthcare capacity. Under NATO cooperation, for instance, coronavirus patients from northern Italy were airlifted to Germany for treatment.

in use to deliver medical supplies, including those originating from Asian countries,” Globsec policy institute director Alena Kudzko told us. “The cooperation also includes, for example, opening fast-track paths through airspace for military aircraft carrying medical supplies or transporting patients from one European country to another.

“Combatting pandemics and bio-threats is an area where international organisations can complement each other and fill gaps in responses, highlighting both the need for and the potential of NATO-EU cooperation.”

The defence-industrial base steps up to combat coronavirus

Industry and the defence supply chain have also has played a vital role in the coronavirus response. In the UK, defence contractors such as Bae Systems, Babcock , and others joined the national effort to manufacture the ventilators required for treating the most serious cases of Covid-19.

Announcing the company had joined the programme in March, Babcock director of technology Jon Hall said: “This is a critical time for the country as a whole and for the NHS in particular. When the opportunity arose for us to get involved in helping the NHS to save lives, we knew it was the right thing to do. I’m really proud of the commitment and innovation of everyone in the team, across Babcock and our medical and supply chain partners.

“Combining our engineering expertise with advances in medical technology has resulted in a solution that will help the NHS save lives. That capability, combined with a diverse supply chain will ensure that we can get this equipment manufactured, processed and delivered as a matter of urgency.” 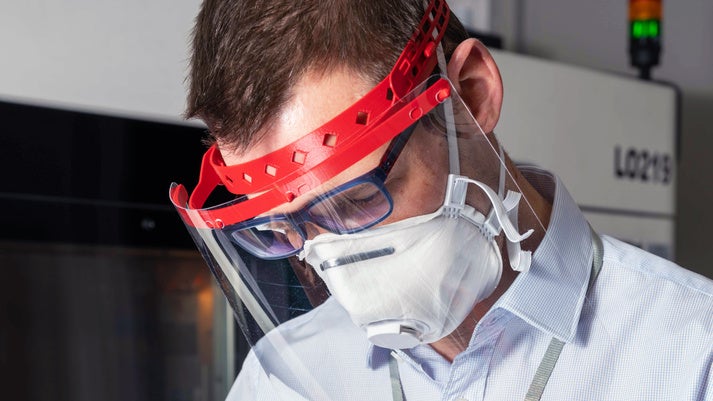 A number of defence contractors adapted their specialist manufacturing capabilities such as 3D printing to support the production of personal protective equipment. In April, BAE revealed detailed plans to deliver 145,000 face shields to frontline workers using a mix of PPE sourced from suppliers and equipment built in-house.

Commenting on the production of PPE, BAE Systems manufacturing and support director Richard Hamilton said: “We’ve had an amazing response to our recent announcement that we’re donating PPE to the NHS. This has been a real team effort at a difficult time for everyone. Employees across our air, maritime and electronic systems sectors, as well as our suppliers, are all rallying to play their part in the national endeavour as we work together to ramp up and further increase the supply of vital protective equipment to the frontline.

“As a result of everyone’s collective efforts, we’ve been able to respond to requests to send equipment directly to medical staff in our local communities working in GP surgeries, the ambulance service and hospices, as well sending supplies to NHS hospitals and trusts.”

In April, Lockheed Martin also accelerated $156m in payments to its supplier base, with CEO Marilyn Hewson saying the aim was to 2provide critical financial and other support to the most vulnerable elements of the US defence industrial base”. On top of this Lockheed, also pledged to donate up to $10m to charities supporting the pandemic response in the US.