Analysis from IISS found that across Europe defence spending rose to levels unseen before the financial crisis, rising to $289bn in 2019. The leading spender in Europe was the UK with its $54.8bn budget comprising 18.4% of the entire continent’s defence spending.

Europe as a whole has seen a steady increase in defence spending as economies recover and European members of NATO step up their ambitions to meet the recommended spend of 2% of GDP on defence. Only Spain, Italy, Cyprus, Latvia, Austria, Montenegro and Luxembourg saw their defence spending decrease in 2019, with every other nation raising its spend.

Eastern European countries unnerved by Russia’s incursions in Ukraine and Georgia have turned on the taps on defence spending and looked to NATO allies to increase their presence in Eastern-facing countries for fear they could suffer the same fate. IISS noted that two-thirds of NATO allies have plans to reach the 2% of GDP spending commitment by 2024 after the US protested it was taking on too much of the burden. 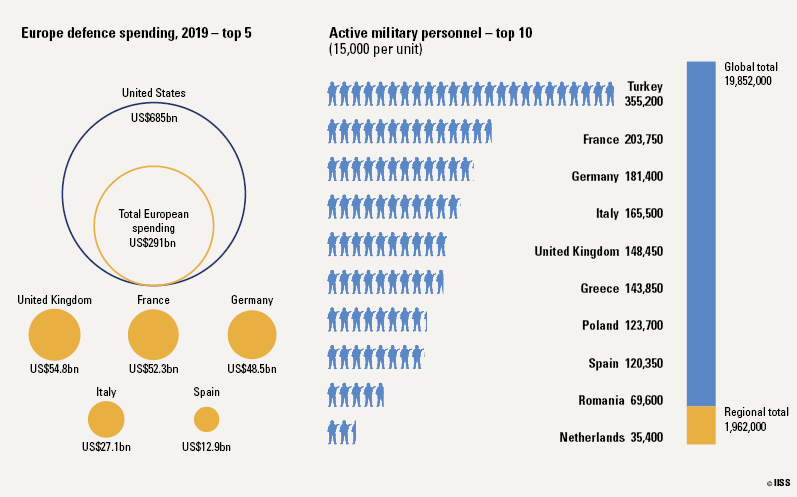 IISS senior fellow for defence and military analysis, and editor of The Military Balance James Hackett told Army Technology: “Defence spending across the continent was up by 4.2% in 2019 when compared to figures a year earlier. European states spent US$289 billion on defence in 2019, in real terms. We also noted that spending on defence investments – procurement and R&D –  increased as a share of total spending from 19.8% in 2018 to 23.1% in 2019, for countries where data is available.

“Although economic growth across the continent slowed in 2019, the rise in defence spending owes much to changing threat perceptions. Some states are funding specific recapitalisation and modernisation programmes, with purchases including rocket artillery and air defence assets as well as combat air platforms.”

Hackett explained that despite the successive increases, spending in European countries has only now managed to beat the pre-financial-crisis of spend of $280bn while other countries have seen a steady increase over the last decade.

Hackett said: “That said, the increase in European spending just brought the continent back to the spending levels seen at the beginning of the financial crisis in 2008. Germany was largely responsible for the increase in European defence spending. Germany accounted for over a third of the increase when measured in constant 2015 dollars. But, even with this increase, Germany’s contribution still fell US28.7bn short of the NATO aim to spend 2% of GDP on defence by 2024.

“Defence spending was projected to rise by 9% in 2019 in Central Europe in constant 2015 dollars, compared with 2018. In Northern Europe the figure was 6.6%; in Western Europe, the figure was 2.9%; though in Southern Europe spending fell by 3%, due to reduced budgets in Italy and Spain as well as differing threat perceptions.” 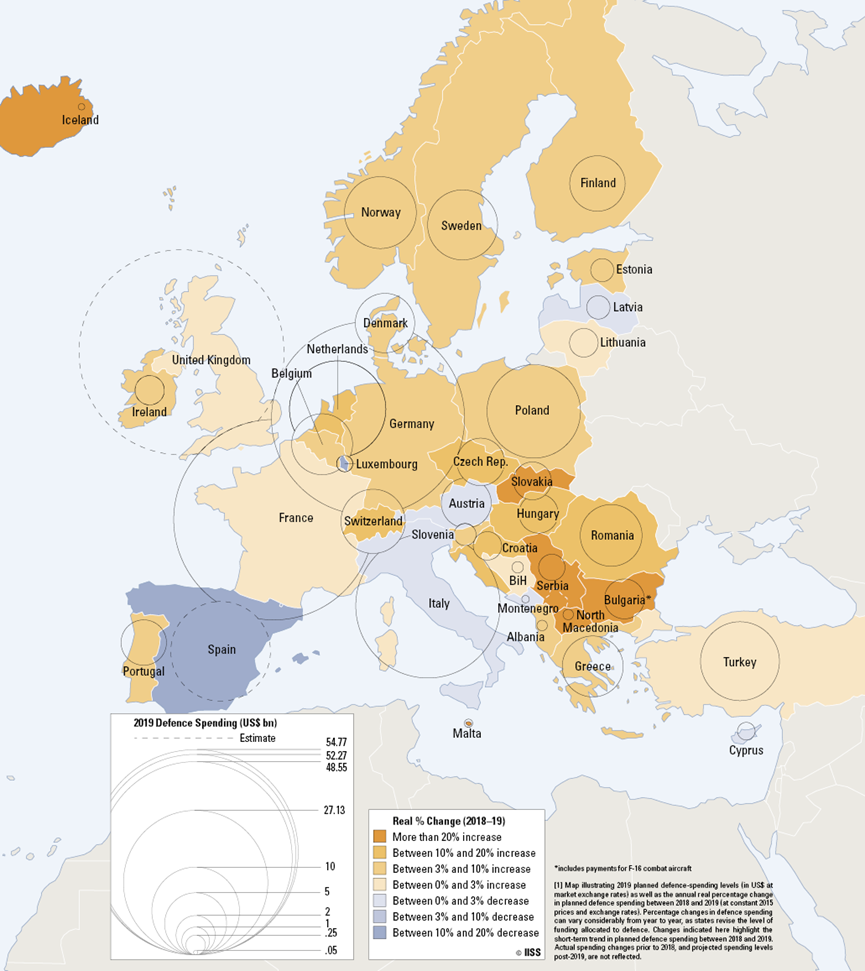 IISS noted that in Europe the return of great power competition between countries, and specifically the old adversaries of Russia and NATO, was a key driver of defence policy. However, the continent has seen political discussions over the utility of the organisations as different members argue over what the biggest threats it faces are.

IISS also found that continued US presence in Europe and its increasing presence in Eastern European countries had done little to assuage European concerns over US strategy and commitment to the defence of the region. It added that if the US faced a crisis that required a US troop surge in the Asia-Pacific, personnel and equipment could be moved from Europe to plug the gap.

Focus on the UK

However, in The Military Balance IISS noted: “The United Kingdom’s Ministry of Defence (MOD) will likely continue to struggle to fund its current capabilities, arrest a decline in personnel numbers and manage the risk to its equipment-modernisation plans, even with the increase of £2.2 billion (US$2.8bn) over two years that came with the 2019 defence budget.”

The UK is about to embark on an integrated Foreign Policy and Defence Review which aims to look at the UK’s capabilities from top-to-bottom and provide a comprehensive account of the Armed Forces going into the 2020s. IISS said that the UK’s defence policy remains rooted in the ability to project stability across the world, requiring direct commitments to a number of operations from NATO forward presence in Eastern Europe to on-going counter-terrorism operations in the Middle East, the UK is also currently in command of the operation to police the Strait of Hormuz and protect commercial shipping.

IISS said that while British Armed Forces managed to maintain a good balance between ‘combat, combat-support and logistic-support functions’ the organisation said that in other areas namely armoured warfare and air defence the UK is close to ‘critical mass’. Modernisation programmes for the Challenger II Main Battle Tank and Warrior Infantry Fighting Vehicle at the time of the reports writing were still not fully contracted despite years of planning.

IISS also highlighted the ongoing shortfall in the MOD’s Defence Equipment Plan of between £7bn and £14.8bn as an ongoing problem that has yet to be resolved despite budget increases. The size of the UK’s Armed Forces is also seen as an area of concern with shortfalls in recruitment.

IIIS said: “The personnel strength of the British Armed Forces continues to decrease, with an overall deficit of 7.6% in 2019, compared with 6.2% the previous year. Although recruitment initiatives continue, shortages remain in key specialist areas, including 18% of required Royal Air Force (RAF) pilots.”