Outlining the new ‘Integrated Operating Concept’ at a Policy Exchange event, Carter outlined a picture of armed forces that are more actively engaged in operations around the world rather than responding to contingencies. This comes as the UK Armed Forces wrestle with balancing grey zone threats below the threshold of conflict with the threat of conventional warfare.

Carter said that in a response to a more complex strategic environment, the UK “must fundamentally change our thinking if we are not to be overwhelmed.”

During his speech, Carter warned that the UK’s openness had left it exposed, going on to say that the UK’s adversaries had “studied our ‘Western way of war’, identified our vulnerabilities and modernised their own capabilities to target them.”

He warned that countries like Russia and China were seeking to “win without going to war” through the use of ‘grey zone’ activities below the threshold of what is traditionally seen as a conflict in the West.

Carter added that Russia had created ‘battle laboratories’ out of conflicts in Syria and Ukraine to “develop their tactics and battle harden a new generation of soldiers.” 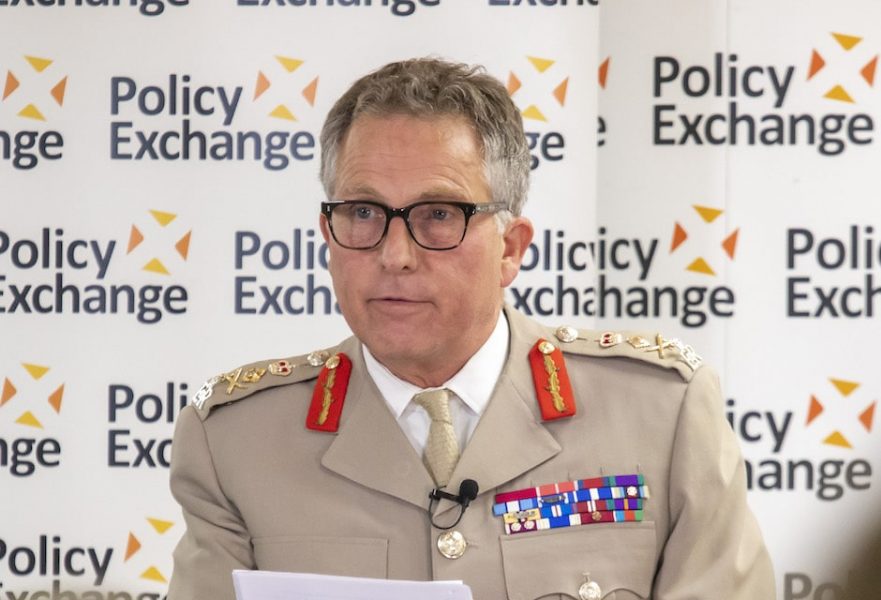 “Authoritative PLA texts have argued that the ambiguous boundary between peace and war opens up opportunities for the military to achieve its ends, disguising its activities as civilian, and therefore peaceful.”

Outlining the integrated operating concept, Carter described ‘big ideas’ firstly saying that the UK must distinguish between ‘operating’ and ‘war-fighting’ in a move that will the British Forces more actively deployed around the world and operating in cyber, recognising the need “to compete below the threshold of war in order to deter war”.

Carter explained: “Competing involves a campaign posture that includes continuous operating on our terms and in places of our choosing.

“This requires a mindset that thinks in several dimensions to escalate and deescalate up and down multiple ladders – as if it were a spider’s web. One might actively constrain in the cyber domain to protect critical national infrastructure in the maritime domain.”

He added: “This posture will be engaged and forward-deployed – armed forces much more in use rather than dedicated solely for contingency – with training and exercising being delivered as operations.

“It will involve capacity building and engagement in support of countries that need our support. This could include partnered operations against common threats – particularly violent extremism. And this may involve combat operations.”

Under the new operating concept, UK forces are to be integrated more closely across the three branches as well as with the wider UK Government and allies. Moving it forward Army Technology understands the UK could form closer defensive ties with five eyes nations as well as countries like Japan.

Carter added: “Effective integration of maritime, land, air, space and cyber achieves a multi-Domain effect that adds up to far more than simply the sum of the parts – recognising – to paraphrase Omar Bradley – that the overall effect is only as powerful as the strength of the weakest Domain.”

Modern warfare, Carter said, was increasingly a game of ‘hiding and finding’ adding “It [warfare] will be enabled at every level by a digital backbone into which all sensors, effectors and deciders will be plugged.”

In achieving a new force structure Carter warned that some ‘sunset’ industrial era capabilities would need to be cut to make space for more modern capabilities.

With General Sir Nick Carter, Chief of the Defence Staff

Introduced by @BWallaceMP and Chaired by General David Petraeus https://t.co/J5KcN97lC0

The full Integrated Operating Concept document reads: “Expensive, crewed platforms that we cannot replace and can ill afford to lose will be increasingly vulnerable to swarms of self-coordinating smart munitions — perhaps arriving at hypersonic speeds or ballistically from space — designed to swamp defences already weakened by pre-emptive cyber-attack.”

Carter added: “We will have to take risk, accept some failure and place emphasis on experimentation by allocating resources, force structure, training and exercise activity to stimulate innovation in all lines of development, with a responsive commercial function at the leading edge. This will enable adaptive exploitation as opportunities become clear and allow better financial control.”

The UK will invest more heavily in electronic warfare capabilities and deep-fire capabilities, with both being used to strong effect in Syria and Ukraine.

Speaking on Tuesday, the head of The British Army, Chief of the General Staff Sir Mark Carleton-Smith said a future British Army would be supported by “longer range and more powerful artillery than the Army have ever used, firing on targets identified by swarms of drones.”

The integrated operating concept describes the future shape of the armed forces as including ‘smaller and faster capabilities’ to avoid detection, as well as trading protection for ‘increased mobility’.

The concept adds that the armed force will lean more heavily on low-observable and stealth technology while increasingly depending on electronic warfare capabilities. The future force

will be made up of a mix of crewed and uncrewed platforms which are integrated into a ‘combat cloud’.