During his speech, Wallace said the armed forces would operate ‘much more in the newest domains of space, cyber and subsea’ as part of a mission that would involve working to prevent as well as win conflict.

Wallace added that the UK’s enemies had adapted faster than the UK and that the ‘static concept of war versus peace’ no longer applies as more and more often operations are undertaken in the so-called ‘grey zone’ either side of armed conflict.

Commenting on the force Wallace expected to emerge from the UK’s ongoing Integrated Review into defence security and foreign policy, the defence secretary said: “First, it would be a force that is prepared for persistent global engagement and constant campaigning, transiting between operating and fighting.

“Secondly, it will be relentlessly innovative, as nimble and advanced as those who would do us harm, with a sharper edge to tackle the threat in an age of constant competition.

“Instead of mass mobilisation, this future force will be about speed, readiness and resilience, operating much more in the newest domains of space, cyber and subsea, and working to prevent conflict as well as winning it.”

Expanding on the future force Wallace added: “Third, our future force will continue to project our global military power, and influence in concert with our other allies. Ours will be an armed force that operates at full capacity, with a more flexible force structure that is better equipped for lighter tasks.

“It will be a future force that not only maintains our leadership in NATO but is more forward-deployed, deterring Russian activity in Europe, combatting terror in the Middle East and the Sahel, and countering Chinese activity in the Asia Pacific.”

The Integrated Review has been billed as the ‘deepest’ review of the UK’s defence policy since the Cold War. It has so far seen rumours of deep cuts to The British Army’s personnel count, as well reported plans to mothball the UK’s fleet of Main Battle Tanks (MBTs) and Armoured Fighting Vehicles (AFVs) which were recently denied by Wallace.

Wallace said that the Integrated review would deliver an ‘honest proposition for a modern workforce’.

The Integrated Review is due to be published in November.

Last week, the Defence Secretary announced the Ministry of Defence (MOD) would invest £23.8 tripling the size of the UK’s logistics hub at the port of Duqm in Oman. The port has dry dock facilities big enough to house the UK’s Queen Elizabeth-class aircraft carriers.

The Defence Secretary made his speech surrounded by a range of uncrewed systems onboard HMS Tamar, including a number of uncrewed aerial vehicles (UAS) giving a glimpse at the type of equipment that could be a mainstay of the future of the UK’s Armed Forces.

HMS Tamar is Batch 2 River-class offshore patrol vessel and was commissioned on 4 June 2020. For the press conference, the ship was docked next to the WW2 era Town-class light cruiser HMS Belfast. 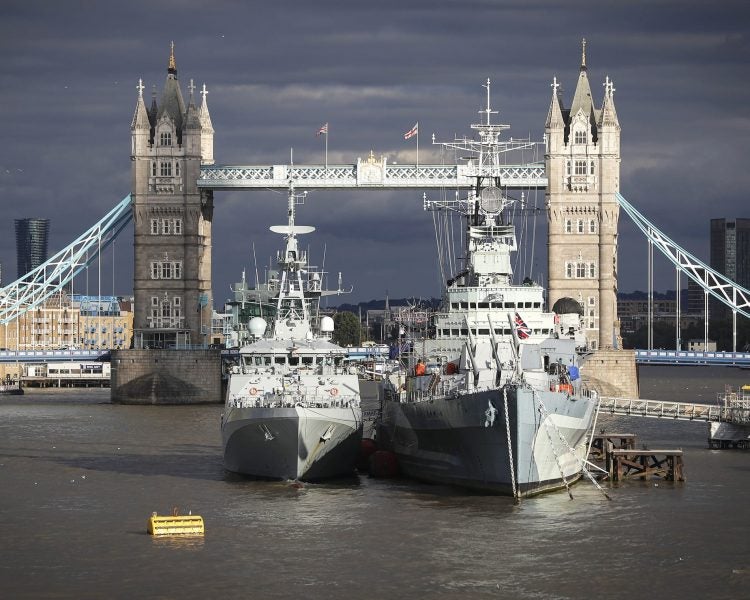