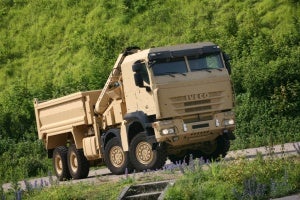 Iveco Defence Vehicles has completed delivery of its largest ever order in the UK of 206 6×6 and 8×8 Trakkers to support the Royal Engineers on operations.

Replacing the existing fleet, the new vehicles have been supplied through two separate procurement routes. The first of these, for 182 6×6 vehicles, was through the C Vehicle PFI contract run by the company ALC as prime contractor. Vehicles were supplied in five variants, with three – the medium dump truck, self-loading dump truck and truck mounted loader – being managed by Iveco and the other two variants – a drill rig and a flush capping system – being procured under ALC’s direct control.

The second procurement resulted from the success of this 6×6 fleet in service. The requirement was for a fleet of protected self loading dump trucks for service on operations.

As Iveco had already developed a ballistic steel cab for the Trakker family, the 8×8 Trakker was a natural choice for this demanding role. The procurement was a direct purchase by the UK MoD, with Iveco managing the complete integration activity. This required input from five separate sub-contractors – GD (UK), Terex Atlas, Thompson Engineering, BI Engineering and KraussMaffei Wegmann.

A total fleet of 24 self loading dump trucks (protected) are now in service, with the majority of the fleet on operations, where they have been extremely well received. The protection provided by the steel cab, bar armour and other countermeasures has been particularly welcome.

This completes a series of successes in the field of logistic vehicles by Iveco in recent years, including significant contract wins in France, Switzerland, Germany and Spain. The company is currently bidding to supply Trakker to the Norwegian and Swedish Armed Forces to re-equip their logistic vehicle fleets.

The Trakker chassis has also been the prime mover of choice for a series of other programmes, including, most recently, the supply of FAUN truck mounted trackway systems to Turkey.

Trakker was originally designed for heavy commercial applications, such as quarry work, but its reliability, flexibility and durability has made it particularly suitable for adaptation to defence applications. It is complimented by the Iveco Defence Vehicles high mobility range of 4×4, 6×6 and 8×8 specialist military vehicles.

These programmes show how Iveco’s strategy of forming industrial partnerships has allowed the development and delivery of vehicles to support military operations with highly reliable and tailor-made solutions at a competitive price and against tight time constraints.