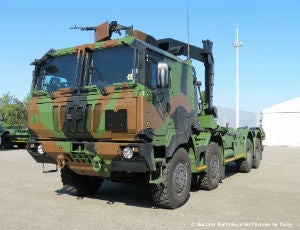 Iveco Defence Vehicles and its French partner Soframe – a subsidiary of the Alsatian Lohr Group – have handed over the first of 200 multi-purpose military vehicles of the Porteur Polyvalent Terrestre (PPT) Programme to the French Armed Forces.

The hand-over ceremony was held at Section Technique de l’Armée de Terre/ French Land Armed Forces (STAT) Headquarters. The contract was awarded in 2010 by the Division of General Armaments (DGA) of the French Ministry of Defence.

The 8×8 special high-mobility vehicles provided to the French Army offer exceptional off-road mobility and a fording capability, which enables them to provide logistic support to any military operation in the most hostile environmental conditions.

All vehicles will feature an armoured cab and will ensure maximum crew protection with excellent operational flexibility and carrying capacity. Project delivery will include maintenance and the supply of spare parts.

This important supply contract, which consolidates Iveco Defence Vehicles’ and Sofreame’s European market leadership in the military sector, provides a response to the current and anticipated requirements of the French Armed Forces in terms of logistic support and crew protection.