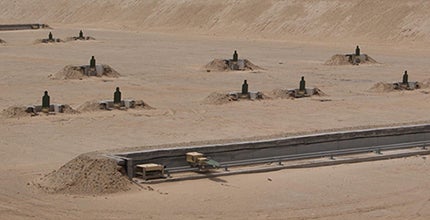 TTS offers a wide range of infantry targets. For example, pop-up targets can be exposed in a variety of ways with rotary movement combined with lifting to provide friend/foe discrimination training.

Advanced target mechanisms serve typically on combined arms and multi-purpose ranges and simulate appearing and disappearing full-scale tank targets with dimensions up to 7m x 3m. The powerful hydraulic drive with its low clearance endows the SAT with an enormous lifting capacity of 300kg and a smooth and sturdy lifting process even at large target silhouettes.

At TTS the continued expansion of the modular target systems now encompasses targetry where silhouettes, motion and speed can easily be altered to diversify the training and enhance training realism. With these capabilities, animation can be as unpredictable as the real combat threat.

TTS offers fully computerized range control systems that allow for both control and status monitoring of all target appliances on the range. Different types of mobile control units are available as compact handheld target control systems.

Specifically designed for military use, they are battery powered and radio-controlled terminals to remotely operate and manage all equipment that can be delivered for a live fire training area by TTS. In addition to a centralized control system, a range complex can be controlled from a mobile control vehicle, which enables the instructor to move his range control to any desired location.

For precision shooting and zeroing, TTS offers marking and scoring technology for supersonic and subsonic projectiles. The LOMAH sensor system enables the correct detection of the location of the hit on the target and is even able to detect the exact location of near misses.

Box target systems operate in subsonic as well as in supersonic regions. In addition to those systems TTS Shooter’s Monitors give a detailed view and precise hit results. Shot sensors installed on each firing position guarantee unimpeachable hit counting and eliminate wrong scoring on multi-lane ranges.

ORTs support training at varying (adjustable) shooting distances while simultaneously allowing for 180° turning target mechanism, which can present the friend or foe side of a target board.

The ‘Range in a Box’ system is a complete package including modern targetry equipment and multifunctional container infrastructure. The modular concept allows a customized solution specifically composed for each customer’s requirements. Autonomous and modular targetry equipment allows operation around the globe.

Theissen Training Systems (TTS) has released a new series of products for military use.

Theissen will be attending the SHOT Show and Conference between 17-20 January in Las Vegas.

Theissen Training Systems will be attending the I/TSEC Conference 2016 between 28 November to 2 December at the Orange County Convention Center, Florida.

After fielding two out of four ranges for the US Army, the US Government has decided to update its training doctrine to now include location of miss-and-hit (LOMAH) electronic shot detection system.

Theissen Wins Contract From US Army

Theissen Training Systems has won a contract from the US Army PEO STRI (Program Executive Office for Simulation, Training and Instrumentation) to supply live fire target systems and location of miss and hit (LOMAH) equipment.

Theissen Training Systems will be exhibiting at Eurosatory 2010, the world’s greatest land and land-air defence exhibition. A new part of this exhibition is daticated to simulation and training only. All the latest international defence and security trends and innovations will be at E

Theissen Training Systems will be exhibiting at ITEC 2010 from the 18th to the 20th of May. ITEC 2010 will be held in London. The UK is second to the US in terms of defence training spending and is ideal to play host to Europe’s annual defence training, education and simulation event. I

Theissen Training Systems, a leading manufacturer of live fire target systems, will be participating as a key event partner in this year's Levels of Fidelity (LoF) live simulation in combat training symposium taking place in September. The event, now in its sixth year, has established

The Training Systems Inc, the affiliate of Theissen Training Systems in the USA is exhibiting at the I/ITSEC 2005 in Hall A, Booth 267 taking place November 28 - December 1, 2005 at the Orange County Convention Center in Orlando, Florida. The I/ITSEC promotes cooperation among the Arm

Theissen Training Systems GmbH has delivered 23 containers of deployable training systems from the production facility “De Rijk” in Belgium. Deployable equipment and the “Range in a Box” system are a part of Theissen´s effort to bring deployable solutions to customers serving no