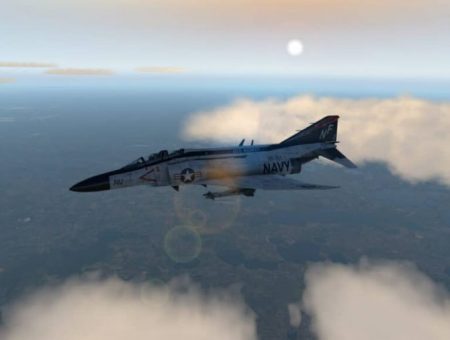 The latest release of the SilverLining 3D Cloud, Sky, and Weather SDK (5.078) features substantial performance and visual improvements to its GPU ray-casted, ‘volumetric’ cloud option. Developers may access these clouds as the SilverLining: CloudTypes: STRATOCUMULUS type within the SDK.

While GPU ray-casted clouds have existed within SilverLining for years. Previously, we discouraged their use because particle-based clouds were more performant. With these improvements, however, they are now the fastest clouds we offer, and they also feature the most complex, realistic lighting effects of any cumulus cloud layer offered. It is now possible to draw complex volumetric cloud formations to the horizon while maintaining real-time frame rates.

These are true 3D, voxel-based clouds with the same physically based cloud growth model that powers our other cumulus cloud types. 3D textures consume a fair amount of video memory, but modern video cards generally can handle the load without a problem. Technology has finally caught up with this approach.

These new volumetric clouds use a novel approach to split the computational load of lighting between the GPU and CPU in an optimal manner, resulting in framerates we never thought possible for true 3D voxel clouds. We have also come up with some clever ways to minimise the complexity of the shaders without introducing visible banding or slicing effects in the process. Our approach also minimises texture lookups within the cloud shaders, which is also key to maintaining fast performance.

Volumetric, ray-casted clouds are especially valuable in VR applications, where the rotation of particle billboards can be very distracting while flying near a cloud. Volumetric clouds get rid of billboards entirely, leading to a smooth experience as you approach and fly through them. The per-fragment lighting, including full Henyey-Greenstein phase effects, leads to stunning details both outside of the clouds and within – especially at dawn and dusk.

Users migrating from earlier versions of SilverLining should note that the thickness parameter on the STRATOCUMULUS cloud type is now interpreted differently; be sure to read the release notes and updated documentation for SilverLining: CloudLayer: SetThickness().

Improved volumetric clouds are available as a free update to any SilverLining licensee with a current support and maintenance plan, or to new customers. Visit our sales page or get a free evaluation SDK to check it out.

Version 4.33 of the Triton Ocean SDK for OpenGL and DirectX has replaced the AMD APP...