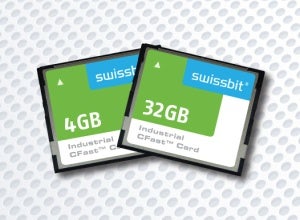 With the new F-200 series CFastTM card and the SATA CompactFlash card, Swissbit has extended its successful CFast portfolio with a new processor technology, which has enabled it to design SLC storage cards with a capacity of up to 64GB. The F-200 series includes an SATA II (spec 2.6) interface and is compatible with ATA7 and ATA8. Thanks to their reliability, comprehensive monitoring methods, optimised TCO (total cost of ownership) and guaranteed long-term availability, these cards are particularly suitable for use in the following sectors: industry, automation, medicine and transportation as well as communication and networks.

The high level of reliability is achieved through well designed wear levelling, read disturb management and the BCH-ECC (Bose-Chaudhuri-Hocquenghem-codes) unit, which can correct up to 24 bits per 1024 bytes using a tried-and-tested procedure. What’s more, only SLC (single level cell) flash storage cells are used, which have been tested to ensure the highest level of reliability, and specially developed and optimised algorithms for flash handling. Thanks to TRIM command support for 4KB random write access, the F-200 series can achieve a value of up to 600 IOPS (input/output operations per second), which is unusually high for CFast cards.

In order to eliminate problems related to unexpected storage failures, Swissbit has equipped the power fail safe F-200 series with a S.M.A.R.T. (self-monitoring, analysis and reporting technology) protocol and life time monitoring. The CFast cards achieve read/write speeds of up to 130MB/sec with a maximum power consumption of 0.9W. They are compatible with the CFast specification 1.1 and now also support the SATA and CFast power save modes.

The F-200 Series will be available from August with storage densities of between 2 and 64GB. In accordance with the Swissbit philosophy, long-term availability with a fixed BOM (bill of materials) as well as shock and vibration resistance are guaranteed. What’s more, Swissbit ‘Design-In’ is available to provide support with its own in-house system and storage specialists.