Nuclear Emergency Training for the Netherlands Ministry of Security and Justice 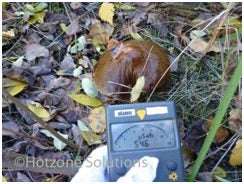 Hotzone Solutions conducted its first Nuclear Emergency Training (NET) for customers at the International Chernobyl Centre which includes the exclusion zone of Chernobyl Nuclear Power Plant (ChNPP), Ukraine, for representatives of the Netherlands Ministry of Security and Justice in mid-October 2012.

The course consisted of the following elements:

Lectures were conducted in the detection of radioactive sources, protection against radiation, personal protective equipment (PPE), and decontamination measures. Practical training was conducted with closed and open radioactive sources and included visits and tasks within the exclusion zone of the ChNPP.

The visits to the Exclusion Zone (Site tour) included the following areas:

Practical training within the Chernobyl Exclusion Zone included detection and identification of radionuclides on the territory contaminated by (Cs137, Sr90, Pu239, U235, U238, Ra226 and others) radionuclides, sampling of contaminated soil and vegetation and protective measures.