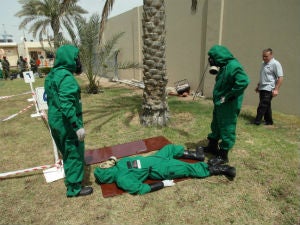 HZS and HZSME conducted the next stage of specific to role training for the Abu Dhabi Directorate General of Security and Ports Affairs on 14 April – 2 May.

This latest stage focused on incident response and critical infrastructure over a three-week period, in which students focused their attention on three main areas of planning, execution and recovery, all at the operator level.

Lessons learnt from previous courses were applied, as well as many new ones, which combined to give the students a solid base from which more detailed doctrine can be developed.

Particularly emphasised was the importance of scene assessment, both prior to and at the point of gaining ‘eyes on’, with the ‘eyes’ sometimes being electronic, thus utilising current equipment and procedures.

Seasonal temperatures also played an important role in highlighting the challenges presented when operating in PPE for potentially long periods.