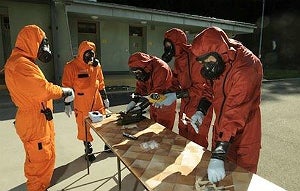 Following the signature of an agreement in June 2012 for the implementation of an international CBRNE master’s course between the University of Tor Vergata, Rome, Italy, Hotzone Solutions, the Netherlands, Seibersdorf Labor, Austria, VVU (former VOP), the Czech Republic, and Chernobyl Centre, Ukraine, we are pleased to announce the launch of the new and unique International CBRNE Master’s Course.

The new International CBRNE Master’s Course will be launched during the academic year of 2013-2014, and will include, among other innovations, live agent training.

It will comprise of:

The master’s course, supported by international partners from four countries, is planned to start in autumn 2013. It will apply ECTS, a central tool in the Bologna Process aimed at ensuring comparability of national systems. It is designed to produce well-trained, highly-skilled and knowledgeable professionals, capable of coping effectively with any CBRNE threat-related scenario. Various organisations and universities from all over the world have already shown a marked interest in the master’s course.

Registration at the University of Tor Vergata, Rome, Italy, will be open as of July 2013.