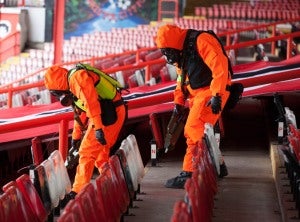 Following a highly successful exercise staged in the UK at Bristol City Football Ground, Steven Pike, Managing Director at Argon Electronics, has offered a list of tips to get the most out of a CBRN response training exercise. Key to the success of the event was the innovative use of electronic CBRN detection simulators, which, integrated with a series of further measures, established a degree of realism that has significantly enhanced training for police in the South West of England.

"The best way to simulate the threat is to use electronic detector simulators that look, feel and function exactly like the real detectors but respond to safe electronic sources," said Steven. "Staging an exercise like this is the nearest the police can get to reality."

How to stage an effective CBRN training exercise can be summarised in the following five tips:

1. Use a large venue. You have to choose a venue that can cater for a large number of participants and allow you to set up the ‘footprint’ of where your emergency services are going to be. If everyone is squashed in it becomes unrealistic, and since realism in the scenario is what you are always striving for a spacious venue is what you need to get off to a good start and make everyone believe in the exercise. If the participants sense that the exercise is not realistic they will soon switch off – especially those who’ve been on many training exercises before.

2. Set the date and don’t change it. Early planning is important so you need to get the date of the training set in stone.

3. Plan your exercise using simulation equipment. You can simulate some forms of contamination with special liquids but these simulated substances don’t lend themselves to repeated training, as they cause lasting contamination. A better way to simulate the threat is to use state-of-the-art electronic detector simulators that look, feel and function exactly like the real detectors but respond to safe electronic sources. With electronic simulation equipment the trainees can realistically carry out their roles without risk of harm or damage to themselves, other participants, their equipment or the environment.

4. On the day, get in early and plan. If the trainees turn up and have to wait around while you spend the first two hours planning they will switch off. Setting up before the simulated incident doesn’t make it any less realistic as long as there’s a reason for it. True, there will be many incidents in real life where planning isn’t possible, but there are also many incidents where intelligence tells you to expect an incident. The premise of the recent pre-planned exercise at Bristol City Football Ground was that the police had received advance intelligence that something was possibly going to happen, hence the reason they were set up.

5. Spring surprises. Take the opportunity to surprise trainees to keep them on their toes. At Bristol City, the organisers sprang the incident as the commanders were delivering their briefings. Whilst the briefings were being delivered they had two smoke machines going off and a hundred people started screaming. To the trainees listening to the briefing who may have been thinking, ‘It’s only an exercise, they’ll start it in a minute,’ the sudden sound of a hundred people screaming and the sight of smoke billowing out of the stadium soon woke them up. All the commanders said it was one of the best things they did because everyone – themselves included – were suddenly no longer in exercise mode but thinking, ‘It’s happening,’ and going into ‘alert’ mode. The officers said that they couldn’t believe the exercise took as long as three hours because they were concentrating so hard. Everyone involved said it was the most realistic exercise they could have achieved.