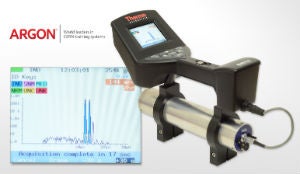 Argon has launched the RIIDEye-SIM-NaI-P, a spectrometer simulation probe that enables responders to train how to use the Thermo RIIDEye handheld Radiation IsotopeIdentifier without an ionising radiation source.

The probe is just the latest of many such innovations from Argon Electronics that enhance both the quality and safety of CBRN training and are based upon Argon’s patented use of ultrasound and radio frequency identification devices (RFID) to simulate hazardous material.

For highly realistic CBRN training, Argon’s RIIDEye-SIM-NaI-P temporarily replaces the real NaI detector. With the RIIDEye-SIM-NaI-P installed, CBRN trainers can plan exercises in which the RIIDEye responds to Argon’s GS3 gamma radiation simulation source, which can be set to represent specific nuclear isotopes such as Cs137 and Co60.

The simulator probe is also PlumeSIM compatible, permitting radionuclide identification exercises to take place in either virtual table top or large are field exercises involving scenarios such as radiological dispersion devices or a nuclear power station accident. All RIIDEye audio and visual alarm functions are maintained throughout the simulation exercise, as well as the data download capability

The RIIDEye-SIM-NaI-P has also been designed to provide long, uninterrupted service during training. The probe is powered by a separate integralrechargeable battery and requires no preventative maintenance orrecalibration. Argon has also launched the SAM940-SIM-NaI-P, which caters for users of a previous version of RIIDEye, called the SAM940.

"The simulator is compatible with other dosimeter, survey / radiac meter simulators manufactured by Argon, permitting multi-detector, multi-isotope training to take place within the same scenario."