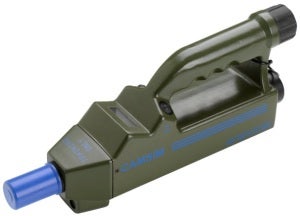 Argon Electronics is exhibiting at Defexpo India between 6 and 9 February 2014, demonstrating its on-going commitment to assisting India in the implementation and procurement of its CBRNe response capability. Defexpo India 2014, which this year takes place at Pragati Maidan, New Delhi, is coordinated by the Defence Exhibition Organisation, an agency that forms part of India’s Ministry of Defence.

Argon recently won its first major order from India when a comprehensive suite of chemical detector simulators was requested by the Indian Army’s premier CBRN training establishment, the Faculty of Nuclear, Biological and Chemical Protection at the College of Military Engineering, located in Pune, Maharashtra.

Argon Electronics managing director Steven Pike said, "We’re delighted to be exhibiting again in India at Defexpo. Having worked with the Indian military recently we’re looking to maintain and build productive relationships in the region.

"For us, it’s vital to develop the dialogue about CBRNe preparedness on a global scale, and we regard India as an important forward thinking customer that takes CBRN training extremely seriously."

Argon will be showing its state-of-the-art CBRN response training simulator PlumeSIM® at Defexpo India 2014. PlumeSIM® software is used with chemical and radiological detector simulation instruments from Argon, allowing virtual dispersal plumes and hot spots to be set up quickly and simply for trainees to detect. The system also provides instructors with a much needed level of flexibility in the type of training that can be provided.

Along with PlumeSIM®, Argon will also display a wide range of popular detector simulators, including the EPD-MK2-SIM, a training simulator that replicates the Thermo Scientific EPD-Mk2 dosimeter. The LCD3.2E-SIM, LCD3.3-SIM, AP4C-SIM, AN-VDR-2-SIM and other simulators will also be on show.

The participation of Argon, global leaders in CBRN / HazMat training systems, will reach more than the local audience; the last appearance of Defexpo India in 2012 featured 232 foreign companies from 32 countries as well as 15 country pavilions. Visitors included 63 delegations from 58 countries.

Visitors to Defexpo India 2014 will find Argon Electronics at Booth C in the ADS UK Pavilion in Hall 11.